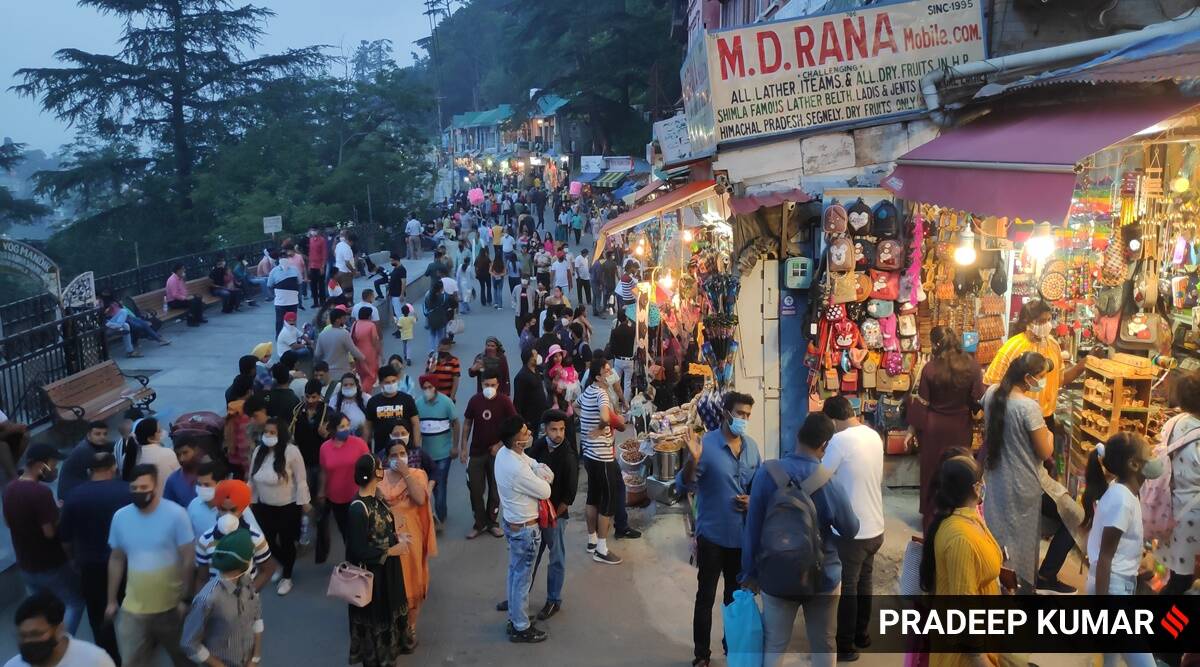 The state tourism department put the number of domestic tourists in June at 4,34,955 as compared to 51,243 in May. Even in the first week of July, the rush of tourists continued, with 7,300 vehicles entering Manali between July 8 and 11. After the extended Covid lockdown that kept the tourists at bay last summer, the hill state of Himachal Pradesh is deluged with visitors fleeing the heat of the plains. June saw over 4 lakh visitors, and with little respite from the heat in the first week of July, the numbers are only growing.

The state tourism department put the number of domestic tourists in June at 4,34,955 as compared to 51,243 in May. Even in the first week of July, the rush of tourists continued, with 7,300 vehicles entering Manali between July 8 and 11.

But this is just the official number given by hoteliers. Industry insiders say the real figures could be much more, given the under-reporting. Also, a large number of travelers also frequent home stays in the hills.

Despite being the farthest, Manali is attracting the lion’s share of tourists, with 1,64,578 visitors in June as compared to 87,153 in Shimla.

“The heavy rains on Monday slowed down traffic considerably, but it is expected to pick up on the weekend,” said SDPO, Manali, Sanjeev Kumar.

Shimla, which used to be the summer capital of India during the British rule, is also chock-a-block with tourists. Last Saturday saw 5,548 vehicles at Shoghi police barrier. Even on Wednesday, 1,556 vehicles had crossed this barrier till 3 pm, said a police official on duty.

Even hotels in the remote district of Kinnaur reported an occupancy of 60-70 per cent on the weekend with visitors making a beeline for Kalpa, Sangla and Nako.

With Prime Minister Narendra Modi is expressing concern at the crowds in hill stations, the local administration has swung into action. Director General of Police Sanjay Kundu has deployed additional companies of police commandos in Shimla and Kullu to implement Covid norms.

While agreeing that it was important to prevent the third wave, Manali Hotel Association vice-president Mukesh Thakur said, “Challans are not a solution. Nor are RT PCR tests or lockdowns. We are going to launch a drive to promote masks.”

Others like Varun Malhotra, a hotelier and president of the Volvo Bus Association Manali, also said masks are the only way out. “We are devising a plan to distribute masks to tourists at the entry points.”

Mukesh Ramdhari, secretary of the Kinnaur Hotel Association, said the government should make RT PCR tests mandatory for tourists from outside the state.

Hoteliers are dead set against the Delhi model of localised lockdowns. As Thakur put it, “Another lockdown and it will be the end of our business.”

Meanwhile, Health Secretary Amitabh Awasthi said the state has not received any communication or any new guidelines from the central government on this issue. “But it is a matter of common sense that people follow Covid norms,” he said.

Hem Bairva, director, State National Health Mission, said, “No view have been taken yet from the state expert committee about the apprehension of a third wave and the influx of tourists. The state government has already made all preparations to tackle the third wave.”

While speaking to mediapersons in Shimla on Tuesday, Chief Minister Jai Ram Thakur said the state government has started an awareness campaign on Covid-appropriate behaviour among tourists and locals alike. “It is beginning to show results. Tourists are following the norms now,” he said.