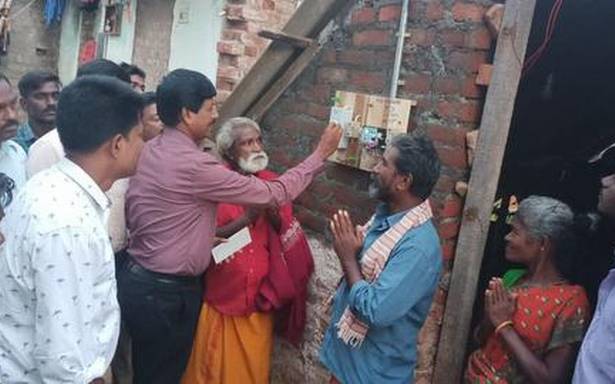 After having suffered in darkness for close to two decades, electricity connection has been restored for a group of Kaatunayakkar families in J.J. Nagar in Thiruparankundram, thanks to the intervention of Finance Minister Palanivel Thiagarajan recently.

Most of the tribal families were “Kudukudupukarars” or soothsayers. They had settled down at the rear side of Thiruparankundram hill, commonly referred to as the Thenparankundram region in the 1950s.

“Our families moved to J.J. Nagar in 2004. A portion of it comes under the Madurai Corporation limit. Though pattas were given to 22 families in phases since 2004, no electricity connection was given to us,” said M.R. Murugan, leader of the Kaatunayakkar families. Only two streetlights help the students here study after sunset. The people have suffered snake bites during the nights on several occasions, he added.

The residents were elated as electricity connection has now been given for six huts in J.J. Nagar.

“We finally feel some light in our lives that had remained dark so far. The officials have promised that more huts will get connections, once they have proper structures.” Mr. Murugan said.

P.R. Vishwanath, who leads the volunteering group Thirunagar Pakkam, played a role in bringing the issue to the notice of Tamil Nadu Finance Minister P. T. R. Palanivel Thiagarajan. He said that the group had been taking efforts to provide solar powered lights to the homes there, when they found out they had no electricity for about 20 years.

“We were trying what we could do from our end. When we took it to the notice of the Minister, he immediately intervened and sent officials from the TANGEDCO to do the needful,” he said.