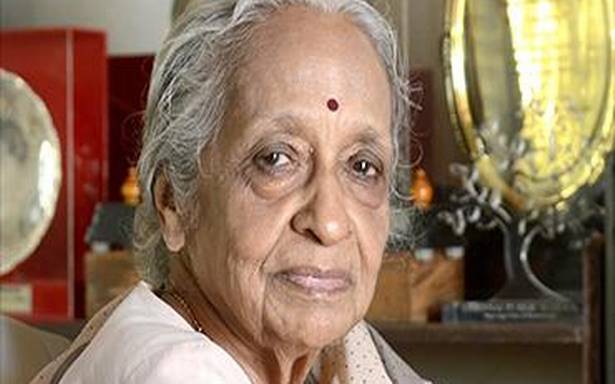 She was synonymous with affordable cancer care in India, says V-P

People from different walks of life paid tribute to V. Shanta, chairperson of the Cancer Institute (WIA), Adyar, who passed away on January 19, during a virtual memorial service organised on Saturday.

Vice-President (V-P) M. Venkaiah Naidu said Dr. Shanta was “truly a legend in her lifetime”. “The country has lost an outstanding medical practitioner and a visionary institution builder,” Mr. Naidu said. She had become synonymous with affordable cancer care in India, he added.

“Hailing from a family of scientists, Dr. Shanta decided to dedicate herself to the cause of affordable cancer care in India,” the Vice-President said. Acknowledging that Dr. Shanta created the concept of paediatric oncology in the 1960s, he wished that the institute would continue her “exemplary effort” and become better by combining excellence and empathy.

Stating that she has dedicated over 60 years of her life to cancer care, Governor Banwarilal Purohit recalled that she always emphasised on compassion and sympathy while treating patients and was an inspiring role model for women everywhere.

“We will preserve her legacy at the government level. She was a pioneer in ensuring that the HPV vaccination programme and the field-level outreach of non-communicable disease care began,” Health Secretary J. Radhakrishnan said. It was important to rededicate to her commitment to fight against tobacco and take forward cancer prevention, he added.

N. Ram, Director, The Hindu Publishing Group, noted that Dr. Shanta was a pioneer in the field of cancer diagnosis and treatment in the country. “She was a person who was absolutely committed to the finest values of the healing profession… She was active till the end. We need to celebrate the life and magnificent contributions of Dr. Shanta,” he said.

Dr. Shanta was deeply concerned about the impact that messages, prejudices, superstitions and wrong signals had on patients as well as their families, he said. She was agonised to know that the treatment of persons with major ailments, including cancer, suffered due to a lack of access during the lockdown, he added.

M. Saravanan of AVM Studios recalled how she had asked him not to show characters dying of cancer as it would affect the confidence of patients. “Hence, we started to avoid depicting characters suffering with cancer and completely stopped showing smoking in our Tamil films and serials,” he said.

N. Chandrasekaran, chairman of Tata Sons, said she had incredible curiosity when it came to technology as she wanted to put it to use for better patient care.

E. Hemanth Raj, executive vice chairman of the Cancer Institute (WIA), said, “Our goal for the future is to take the institute to greater heights as it will be the best tribute that we can give her.”