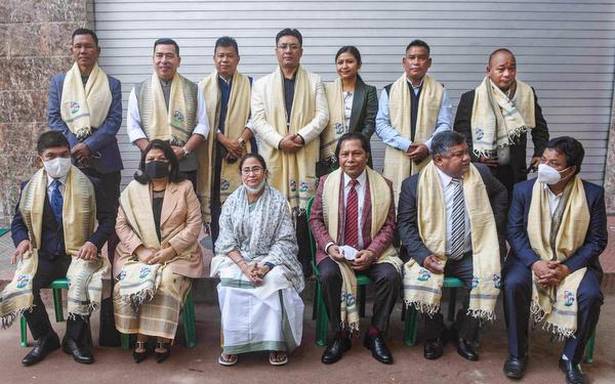 The Meghalaya unit of the Bharatiya Janata Party has said the “backdoor entry” of Trinamool Congress (TMC) may harm the Congress and other political parties in the hill State.

The BJP has also sniffed an opportunity in the 2023 Assembly election because of the possibility of the TMC adding to the dilemma of the people in choosing a party that would best serve their interests.

“We don’t view TMC as a threat. It may threaten the prospects of the Congress and others in Meghalaya,” State BJP president Ernest Mawrie said.

Among the “others” is the National People’s Party, which is the largest constituent of Meghalaya’s ruling alliance. The BJP is a minor partner in this alliance.

Insisting that the TMC would not make much of a mark beyond West Bengal, he said the Mamata Banerjee-led party’s performance in the Tripura civic body poll last year was a case in point.

Mr. Mawrie had earlier said many within the State BJP who campaigned for his removal as the Meghalaya unit president have joined the Congress while the remaining dissidents would join the TMC.

“I came to know that many of them will not remain in the party. Some of them are set to join the AITC,” he said, claiming that the BJP’s central leadership was happy with his performance and banking on him to lead the party in the 2023 Assembly poll.

“We are optimistic about doing well in the elections this time unlike in 2018. We have already started our groundwork and have reconstituted 26 of the 60 Assembly constituency-based committees,” Mr. Mawrie said.

The TMC became Meghalaya’s principal opposition party overnight after former Chief Minister Mukul M. Sangma and 11 other MLAs switched over from the Congress. An assembly line of Congress leaders, members of Youth Congress and National Students’ Union of India followed them.

The Congress received a major blow at the tribal council level when all its members of the Garo Hills Autonomous District Council crossed over to the TMC. These members have upped the ante against the State government for its failure in checking illegal mining and transportation of coal.