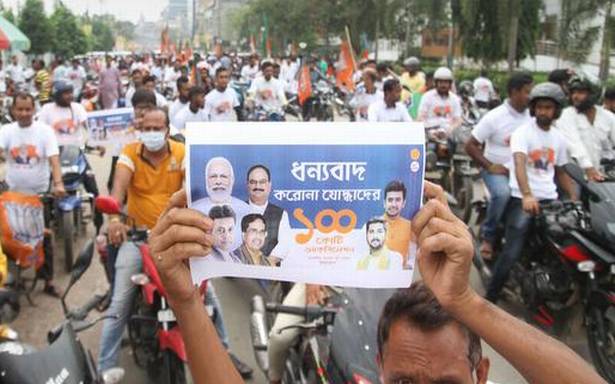 The BJP-ruled Tripura is far ahead of West Bengal in terms of per capita income which is ₹1, 25,191 per year as against Bengal’s ₹1, 15,748, says Sushanta Chowdhury

The Bharatiya Janata Party (BJP) on Monday, November 1, 2021, alleged that the Trinamool Congress (TMC) hatched a conspiracy against the Biplab Deb government in the state to destabilise it and to help the opposition CPI(M) come to power again.

State Information and Culture Minister Sushanta Chowdhury also claimed the TMC, which has "no support base" in the northeastern state, has been struggling to expand its organisational strength.

"TMC’s national general secretary Abhishek Banerjee finds it difficult to expand its organisation. The party, which considers the BJP as its main enemy, hatched a conspiracy to help CPI-M come to power. Yesterday, he said the erstwhile Left government was better than the BJP’s regime," Mr. Chowdhury, the saffron party leader told reporters here.

He also alleged that the Trinamool tried to bring a large number of people from Bengal and Assam for their public meetings here but the police stopped them at the entry point at Churaibari in northern Tripura and several of them tested Covid-19 positive.

Terming the Trinamool’s West Bengal leaders, who are spearheading the party activities here, as "migratory birds", Mr. Chowdhury said, "As they don’t have their base here in Tripura, they are hiring their party workers and supporters from neighbouring states to attend the Ms. Banerjee’s rally." Chowdhury’s allegations came after Banerjee, during a public meeting on Sunday, claimed the BJP government’s "misrule" led to "increasing unemployment, deteriorating law and order and worsening education and healthcare system" in Tripura.

The BJP leader said, "Banerjee in his address agreed that the TMC was not interested with Tripura before the 2018 elections when some of us were with them and fighting against the CPI-M party." The CPI-M, which ruled Tripura for several years, had "ruined the state in terms development and political culture", he alleged.

Claiming that the BJP-ruled Tripura is far ahead of West Bengal in terms of per capita income which is ₹1, 25,191 per year as against Bengal’s ₹1, 15,748.

The rate of literacy is 95 per cent in the northeastern state while, Bengal achieved just 76 per cent, he claimed.

Drawing another comparison between the two states, he claimed Bengal could not manage the COVID situation properly.

"TMC’s spokesperson Kunal Ghosh had earlier accused Mamata Banerjee of being involved in a ponzi scam. Mr. Ghosh is also now leading the party in Tripura," he added.