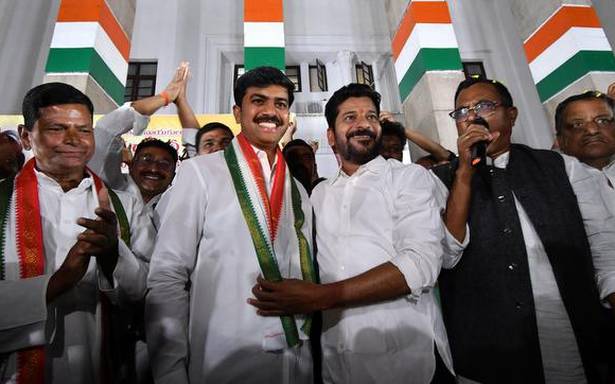 ‘New entrant will strengthen the party’

Convenor of TRS NRI cell in the United States, Abhilash Rao joined the Congress, along with his supporters in the presence of TPCC president A. Revanth Reddy and other senior leaders.

Welcoming Mr Rao into the party, Mr. Revanth Reddy said Mr Rao’s services would strengthen the party and he had joined the party disgusted with the kind of politics Telangana Rashtra Saithi (TRS) was playing at the cost of erstwhile Mahabubnagar district.

He said Mr. Rao, who worked in the USA, returned to Telangana and worked in TRS for 15 years and had now realised that the dreams of the agitation were thrown to the winds.

Mr. Reddy, terming himself as the son of Mahabubnagar soil, said Congress chief Sonia Gandhi had given a huge responsibility of running the party affairs to the Mahabubnagar ‘bidda’ and he would ensure that Congress flag flew high in the district.

He said Kollapur constituency was backward and neglected but he would take the responsibility of developing it once the Congress came to power.

Its lands had been taken away by the government but neither it got water nor the farmers got the compensation for sacrificing their lands, he said.

The medical facilities remain poor while farmers are continuously deceived by the government.

He said Ms. Sonia Gandhi had delivered the Telangana promise despite losing political power and her sacrifice should not go waste.