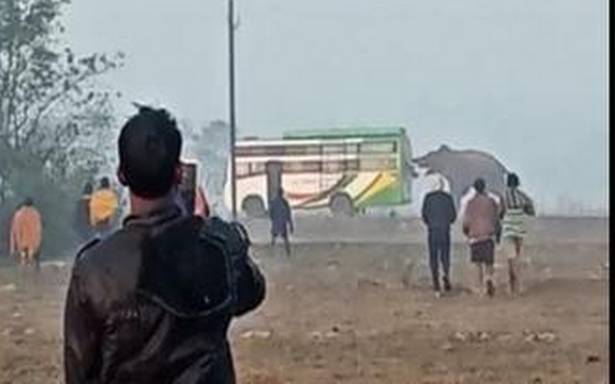 Passengers of a bus had a narrow escape when a wild tusker was seen pushing the vehicle along a road in Odisha’s Mayurbhanj district on Sunday. The bus was on its way from Olamara in Balasore district to Rasagobindapur in Mayurbhanj district in the morning when the incident took place.

The wild elephant came behind the vehicle at Tikapada and rammed the bus. Passengers panicked when they saw the elephant charging at the bus. The rear windshield shattered due to the impact.

The elephant shoved the moving bus with its trunk and tusk for quite a distance. Passengers urged the driver of the bus to speed away from the animal.

In another incident, the Odisha Forest and Environment Department undertook a tricky rescue operation to pull out a wild elephant calf that fell into an open pit at Sureidihi village under the Rasagobindapur Forest Division.

Late on Saturday night, a calf aged about three months accidentally fell into a pit that had a puddle of water. A group of four elephants refused to leave the place without the calf. In fact, they threw in some twigs and sticks in desperation to pluck the calf out.

“Our forest staff made several attempts to go near the pit. But the elephants chased us violently, which made it difficult for us to launch any rescue operation. But our staff never took their eyes off the elephant herd,” said Santosh Joshi, Divisional Forest Officer, Baripada.

“We got an opportunity on Sunday morning when the elephants went to a nearby pond to drink water. We immediately started pumping water into the pit in order to help the calf float. It worked. The elephant herd managed to pull the calf out and went into the nearby forest,” Mr. Joshi narrated.

The Forest Department had twin challenges — rescuing the calf and ensuring there was no human contact with the baby elephant as this could lead to the herd abandoning the calf.

The elephant herd guarding the pit, impatient with the delay in rescuing the calf, damaged four houses in the village, and a vehicle of the Forest Department.