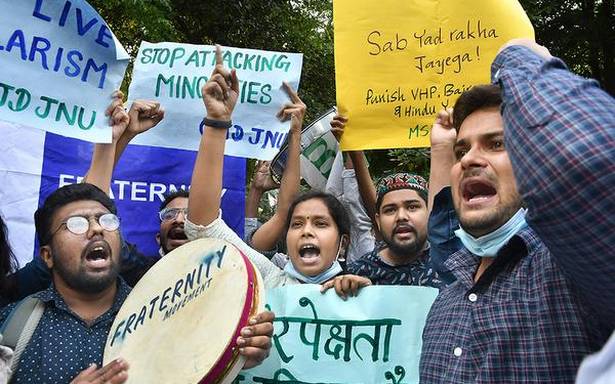 Two Delhi-based women journalists, booked in Tripura for criminal conspiracy and other charges, were detained by the police in Karimganj district in Assam on Sunday.

They had checked out of a hotel in Dharmanagar in Tripura after covering incidents related to the communal violence in the State in retaliation to the attacks on Hindus in adjoining Bangladesh in October.

“We have been detained at the Nilambazar police station, Karimganj, Assam. We were informed by the officer-in-charge of Nilambazar PS that SP of Gomati district (in Tripura) gave the orders for our detention,” Samriddhi K. Sakunia, one of the two scribes, tweeted.

The other journalist is Swarna Jha. Both work for HW News Network.

The two were booked after Kanchan Das, a member of a right-wing organisation lodged an FIR at the Fatikroy police station in North Tripura district. The Indian Penal Code Sections slapped against them pertain to criminal conspiracy, promoting enmity between different groups on grounds of religion, race, place of birth, residence, language, etc., and intentional insult with intent to provoke breach of peace.

The complaint, accessed by The Hindu, claimed that the duo visited some Muslim houses in a village under Fatikroy Assembly constituency and made provocative comments against Hindus besides making conspiratorial remarks against the State government.

Another complaint was lodged against them at the Kankraban police station in the Gomati district on Sunday for fabricating and concealing records and inciting communal hatred.

“Assam Police says that our journalists will be taken back to Tripura for further questioning despite police allowing them to leave the hotel and giving seven days’ notice to record a statement. This is sheer harassment and targeting of the press on the part of Tripura Police and Tripura Government to suppress us from reporting the facts of the case,” HW News Network said in a statement.

Earlier in the day, Ms. Sakunia said in a tweet that they had to face intimidation and were not allowed to move out of the hotel.

The Tripura police trashed the allegations.

“We served them a notice seeking their appearance before the Fatikroy police station but they sought time stating they would need to talk to their lawyer. So, we asked them to depose on November 21,” a senior police officer said.

“We had dealt with them politely and this can be verified with the help of the CCTV cameras installed at the hotel,” he said, adding the duo had marked themselves as students in the hotel register.

A statement issued by Tripura’s Assistant Inspector-General of Police (Law and Order) late on Sunday night said that a team from the Dharmanagar women’s police station was sent to Assam to fetch the two journalists. A Kankraban police team would also be reaching Dharmanagar for “further legal action” against the detained duo.