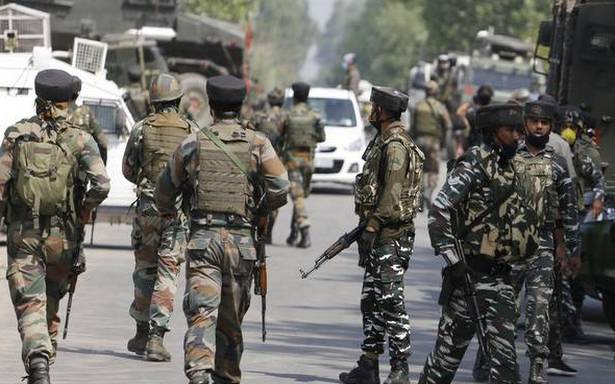 Police said the encounter started when the hiding terrorists fired indiscriminately upon a joint search party in Nathipora area.

Two Lashkar-e-Taiba (LeT) militants, including a non-local militant who was behind the killing of two BJP-affiliated municipal councillors, were killed in an operation launched by the security forces in north Kashmir’s Sopore on Tuesday.

“Two terrorists of the LeT outfit were killed at Nathipora area of Sopore. One of the slain terrorists was identified as Hamas alias Asrar alias Saria, a foreign terrorist, who was active since March 2018 in north Kashmir,” Inspector General of Police Vijay Kumar said.

Sarai, he said, was also the mastermind behind an attack in Sopore, in which two municipal councillors and a policeman were killed on March 29. “He’s the first foreign militant to be killed this year,” IGP Kumar said.

Police said the encounter started when the hiding terrorists fired indiscriminately upon a joint search party in the area.

Arms and ammunition, including an AK-47 rifle and an Insas rifle, besides other incriminating materials, were recovered from the site of encounter. “The identification of the second killed terrorist is being ascertained,” police said.

Police sources said the family of active militant Wasim Ahmed Lonem from Hatlangoo, Sopore, was asked to identify the body of the second slain militant.