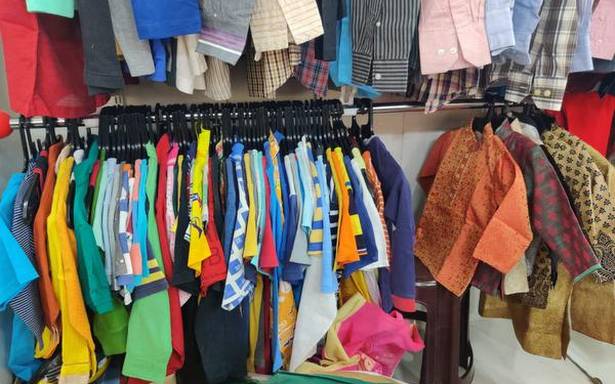 Through the processes that underpin their cloth distribution programmes, non-profits Thuli and Rajasthan Cosmo Club Foundation (RCCF) in their own ways ensure the receiver is hardly made to feel like one.

Thuli’s two stores — more specifically, their location — illustrate it. Both the Adyar and Vadapalani stores are situated in malls, thereby lifting up the profile of the receiver as they head into these stores to collect their once-in-six-months quota of free gently-used clothes.

Through its Smile stores in Nungambakkam and Avadi, both established during the pandemic, RCCF sells sparingly used clothes at a flat rate of ₹20 apiece. It is small token amount, but what it does for human dignity is out of proportion to its printed value.

“The profile of the people buying from these Smile stores is of lower-middle income groups, who can neither ask for donations nor afford expensive, well-made clothes. By allowing them to pay a small amount for it, human dignity is preserved,” says Suresh Gundecha, managing trustee, RCCF.

The notional pricing system followed by Thuli gives the beneficiary a sense of shopping for these clothes and having earned them.

The system kicks in after the gently-used clothes are sorted out its sorting centre in Adyar, laundered and and set to the stores for display.

“Through notional pricing, points are assigned to every cloth. To anybody who comes in with their family we offer around 1500 points worth of voucher. Every family can pick up clothes worth those points for free — clothes, toys and stationery. During the festival season we make sure that everybody dropping into the store gets one pair of new dresses in addition to what they pick up for free. We have not been very successful this year though.”

Now, that takes us to how the festival season always offers an opportunity for increased generosity and greater service. The beneficiaries may aspire for clothes that are straight out of the showrooms, never used before. Sparingly used, neatly laundered and ironed clothes may be good for the entire year, but probably not for the festival season. Are not brand-new clothes traditionally a component of festivals?

“What we generally do for the festive season starting from Vinayaka Chaturthi to Pongal is that we try to get people to donate new clothes also. Pre-Covid, we would generate posters that we would share on social media and when people go shopping they would also pick up a couple of clothes for Thuli. The IT companies would keep boxes so that people would donate new clothes,” shares Ajith Kumar, one of the three founders of Thuli. Shivaji Prabhakar and Jey Bala are the founders. Actor Vijay Sethupathi is Thuli’s honorary trustee.

“Earlier, we had tie-ups with many IT companies and they are not back to work yet. We are not asking anyone anything,” says Ajith, leaving unsaid the fact that the pandemic has been on almost everyone.

The IT crowd is missed, particularly during the festive season, when IT companies would donate toys, packing and labelling them neatly provide age-specific usage information.

Earlier, before the pandemic, through contact persons and committees at gated communities, Thuli would organise collection drives there. It would work like a well-oiled machine, with the sorting done neatly by the residents themselves. During the pandemic, Ajith says he is hesitant about approaching them, as the Covid-19 protocols would make it a challenge for them to reach out the way the used to before.

RCCF is going ahead with its usual plan of parking clothes-collection boxes at gated communities. “There are nearly 400 communities on out list, as all members of our main and affiliate club, and we send out appeals to them through our toll-free number,” says Suresh. “These communities are largely in the northern parts of Chennai, and we have plans to spread out to the OMR region next year. At present, on OMR, we collect clothes from gated communities and individuals on specific requests that come through our toll-free number. We send someone to pick up the collected clothes.”

Ajith also hints at an expansion plan for Thuli, which he noted has been hampered by the pandemic. He notes that Thuli is self-funded being supported by three founders and accepts donations only in kind.

While Thuli’s service through its stores is three years old, RCCF’s Smile-stores initiative is a little over a year old, with its Smile Store in Nungambakkam having celebrated its first anniversary in September this year.

Suresh observes, “RCCF’s cloth distribution has been continuing since 1994, when we would give away old clothes to labourers visiting the construction sites and also reach clothes to those hit by natural calamities. Now, we follow a two assortment system. The gently-used clothes go to the Smile Stores, and the more used ones are given away to the underprivileged.”