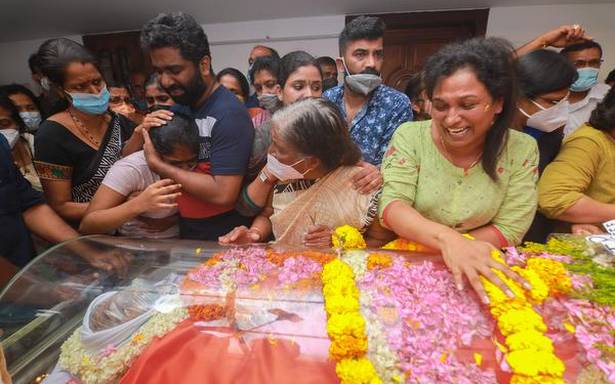 The arrested have been identified as Rajendraprasad, alias Prasad (39), of Mannancherry and Ratheesh, alias Kuttan (31), of Mararikulam South, both Rashtriya Swayamsevak Sangh (RSS) activists. The police said the duo had actively participated in the conspiracy to kill K.S. Shan

The police on Monday arrested two persons in connection with the murder of Social Democratic Party of India (SDPI) State secretary K.S. Shan in Alappuzha.

The arrested have been identified as Rajendraprasad, alias Prasad (39), of Mannancherry and Ratheesh, alias Kuttan (31), of Mararikulam South, both Rashtriya Swayamsevak Sangh (RSS) activists. The police said the duo had actively participated in the conspiracy to kill Shan. An official said Rajendraprasad hatched the plot, organised attackers and the vehicle used in the assault.

Shan was attacked by assailants at Kuppezham Junction in Mannancherry around 7.30 p.m. on Saturday night. He succumbed to his injuries around 11.30 p.m. He was heading home on his motorcycle when a car knocked him down. A group of persons came out of the car and attacked him.

Following the murder, a gang hacked Ranjith Sreenivas, BJP OBC Morcha State secretary, to death at his house at Vellakinar in Alappuzha municipality on Sunday morning.

Mr. Sakhare said the police had received concrete clues about the people involved in the crime. The police were also investigating the larger conspiracy angle behind the murders, the ADGP said.

The car that hit the two-wheeler of Shan was found from Kanichukulangara near Cherthala on Monday.

Meanwhile, an all-party meeting scheduled to take place at Alappuzha District Collectorate on Monday afternoon to defuse political tension in the district was postponed. The meeting will now be held on Tuesday at 4 p.m. Earlier, BJP leaders informed of their inconvenience to attend the meeting due to the funeral of Sreenivas. The BJP alleged disrespect to the slain leader’s body.

Sreenivas was laid to rest at Valiyazheekkal. His body was kept at Alappuzha District Court compound, the BJP office and his house at Vellakinar for the public and relatives to pay their last respects before being taken to his native place Valiyazheekkal.