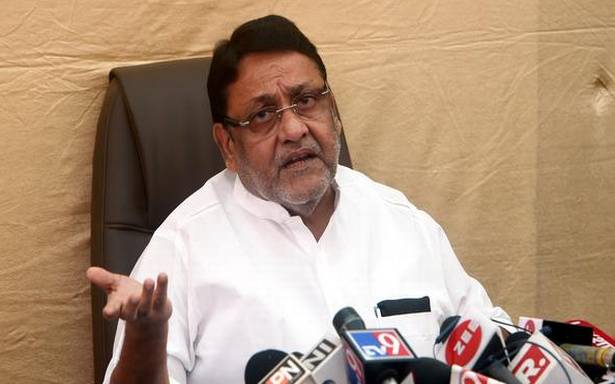 Maharashtra Minister and NCP leader Nawab Malik on Thursday accused NCB’s zonal director Sameer Wankhede and his family of obtaining two separate certificates of his mother following her death in 2015, each mentioning her as Muslim and Hindu.

Addressing a press conference here in the morning, Mr. Malik said Wankhede’s mother Zaheda died on April 16, 2015 and a certificate describing her as a Muslim woman was taken to the cemetery in Oshiwara for her burial.

“But the next day, her family procured another death report, which mentioned her as belonging to Hindu religion,” he said.

The Minister also posted these certificates in support of his claim on his Twitter handle before talking to media.

‘’How can a family have a dual identity? I am speaking in public about this after taking the verified documents from the Mumbai civic body,’’ the NCP leader alleged.

Mr. Malik has been alleging that Sameer Wankhede, though born a Muslim, had secured a central government job claiming to be from the SC category. But Wankhede has denied the allegations levelled against him.

He has been fiercely attacking Wankhede after the Narcotics Control Bureau’s raid on a cruise party last month following which around 20 people, including actor Shah Rukh Khan’s son Aryan Khan, were arrested. Aryan Khan and some other accused were later released on bail.

The minister said that since October 6, he has been ‘’exposing’’ Wankhede regarding how he had ‘’kidnapped’’ Aryan Khan for ransom and fixed a deal of ₹25 crore and settled for ₹18 crore, had made changes in his birth and school leaving certificates, got permit license despite being a minor.

He said that if anybody undergoes a religious conversion, it should be published in a gazette, which was not done in this case.

On Thursday, Mr. Malik’s advocate told the Bombay High Court that the minister will not post any tweets or make any public statements against Sameer Wankhede, his father or any of their family members till December 9. The assurance came after the high court asked the minister whether he has lodged a complaint with the caste scrutiny committee regarding his allegations against Wankhede’s caste credentials, and said if he has not done so what was his intention behind the “media publicity”, which it said does not befit a minister.

Speaking about of the ongoing strike of the Maharashtra State Road Transport Corporation (MSRTC) employees, Mr. Malik accused the opposition BJP of misleading the workers.

“Merger with the state government is not possible. Employees of other government-owned corporations will make similar demand and seek salaries as per the Seventh Pay Commission. The government will not be able to pay such salaries even after taking loan. But it will do everything it can to revive the MSRTC,” he said.