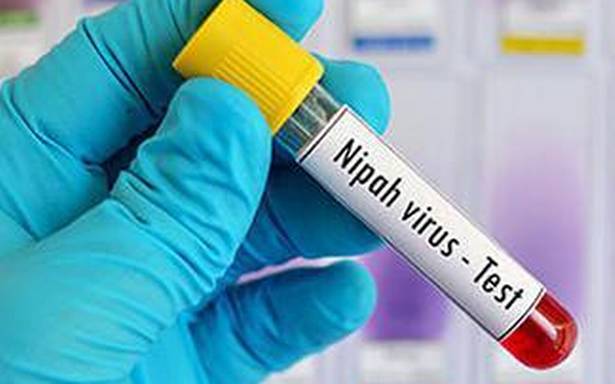 Efforts to trace the source of Nipah virus in Kozhikode’s Chathamangalam are on even as the Health Department has prepared a contact list of 188 persons, including healthcare workers, of a 12-year-boy who died of the infection on Sunday morning.

Health Minister Veena George told the media after a high-level meeting that two of the contacts were symptomatic and were under surveillance. They are healthcare workers at the Government Medical College Hospital (MCH), Kozhikode, and a private hospital, respectively. Ms. George said that a total of 20 contacts, who had been deemed high-risk, would be shifted to the MCH. Others on the list were under isolation. Around a hundred of the total contacts are staff at MCH and 36 others are workers in a private hospital.

“The pay ward at the MCH is being converted as a Nipah ward. Those who test positive for the virus will be shifted to the ground floor. Symptomatic patients and others will be accommodated on the first and second floors. An intensive care unit too has been set aside for the treatment,” she said.

Ms. George said that 38 COVID-19 patients at the pay ward had been shifted to other wards.

A point-of-care testing facility under the NIV is being set up at the Kozhikode MCH by Monday morning. If any positive cases are reported, the samples will be sent to NIV, Pune, and results will be made available in 12 hours.

The Minister said that the boy was initially admitted to a private clinic with fever and other symptoms on August 27, from where he was shifted to another private hospital. He was taken to the MCH on September 1. After preliminary tests, he was taken to another private hospital, whose staff suspected the symptoms to be that of Nipah infection and sent the samples for testing. The initial tests were done at the National Virology Institute’s Alappuzhua unit.

Ms. George said that the final report from the NIV lab at Pune came by Saturday night. However, by Sunday morning, the boy passed away by 5 a.m. on Sunday. Restrictions have been imposed within a three-km radius of his house. Contact tracing would be intensified for another week, until when the incubation period of the infection gets over.

The Minister said that all the deaths in the immediate family and surroundings of the deceased would be checked to trace the source of the infection. Since fruit bats are the carriers of the virus, a team of the Animal Husbandry Department would inspect the area. An alert had been sounded in nearby districts such as Malappuram and Kannur and healthcare workers would have to be careful against possible infection, she said.

Meanwhile, the last rites of the deceased were performed at the Kannamparamba burial ground in Kozhikode. Corporation staff supervised the procedure.