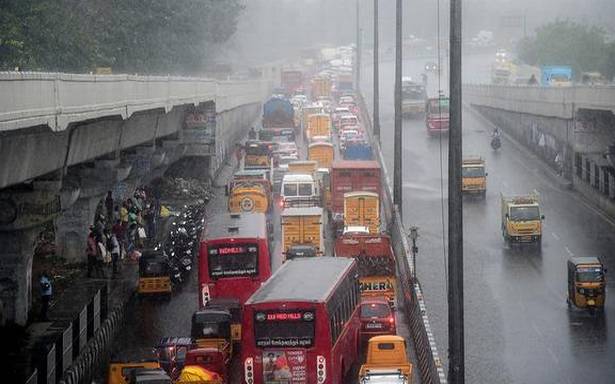 Wet weather will continue till April 18 with isolated spells.

Two fresh weather systems will trigger thunderstorms with moderate rainfall in interior and coastal districts of the State and Puducherry on Thursday. Wet weather is expected to continue over the State till April 18.

Many places in and around Chennai got relief from sultry weather on Wednesday as sudden showers, accompanied by thunder and lightning, lashed parts of the city, including Ambattur, Kolathur, Anna Nagar and Perungalathur. Some areas were waterlogged for sometime. The weather stations did not record much rainfall during the day.

Officials of the India Meteorological Department (IMD) said the same weather trend may continue over Chennai till Friday as light to moderate rain is expected in the city and its neighbourhood. Days may be relatively cooler as maximum temperature is predicted to be around 33 degrees Celsius for two days.

On Thursday, thunderstorms and rain will hit many places in interior and coastal districts and Puducherry with gusty winds blowing at speeds of 30 to 40 kmph. Rainfall would cover fewer areas from Friday and shift to the Western Ghats districts and south and interior Tamil Nadu.

The Nilgiris, Coimbatore, Theni, Krishnagiri and Tirupattur districts have chances of heavy rain on Thursday, and spells of isolated heavy rain would continue till April 17.

N. Puviarasan, Director, Area Cyclone Warning Centre, Regional Meteorological Centre, Chennai, said the trough that was moving towards the Arabian Sea had become less marked. A cyclonic circulation over the Comorin area and its neighbourhood and another system over north interior Karnataka with its trough line extending till north Tamil Nadu triggered thunderstorms over the State.

In the 24 hours ending at 8.30 a.m. on Wednesday, several interior places and Western Ghats districts received moderate to heavy rain. Kothagiri in the Nilgiris district received the highest amount of 11 cm rainfall followed by 8 cm in Edappadi in Salem district.

“Rainfall will gradually decrease after April 16. Unlike monsoon rain, thunderstorms may not bring uniform rainfall covering most places. In Chennai, some areas received a sharp spell of rain while others did not record much rain,” he said.

As northwesterly winds are expected to set in around April 19 or 20, the IMD forecasts a slight increase in temperature level, particularly in north Tamil Nadu.