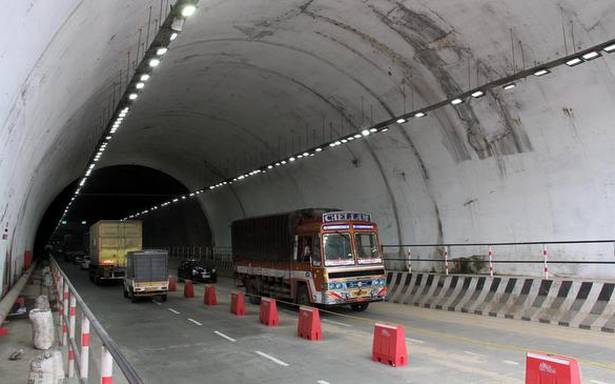 The trial run of two-way traffic through the first tunnel at Kuthiran on Mannuthy-Walayar National Highway 544 was successfully conducted on Thursday.

The trial run was conducted as part of the construction of the road towards the second tunnel, which will be ready for traffic soon.

As part of regulating vehicles for both sides through the first tunnel road, barricades were erected on a 3.2-km stretch from Vazhukkumpara to Kuthiran. There will be speed regulations on the stretch.

Proper lighting has been ensured at points where construction work is being carried out during night also. Road dividers and traffic signal boards have also been erected. Ambulance and crane services have been kept ready at both sides of the tunnel. Overtaking will not be allowed inside the tunnel and on the road under construction.

Vehicles should fill sufficient fuel before entering into the tunnel. A police control room is functioning at Kuthiran. Police personnel have been deployed inside the tunnel. In case of breakdown of vehicles or accidents, the vehicles will be removed using the crane.

Traffic will be restricted at the time of granite explosions for construction at the tunnel.