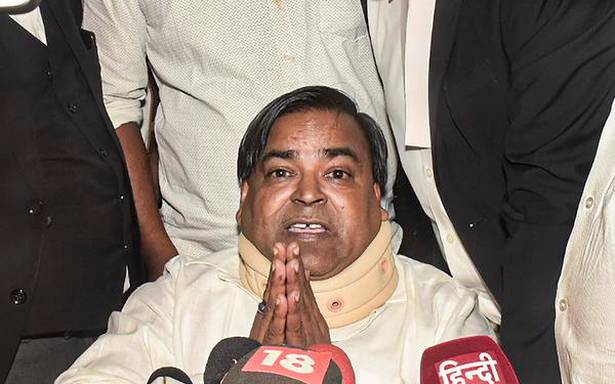 The Samajwadi Party (SP) has fielded Maharaji Prajapati, wife of former Minister Gayatri Prasad Prajapati who was recently sentenced to life after being convicted for rape, from Amethi.

Mr. Prajapati was an important Cabinet Minister in the Akhilesh Yadav government and had been deputed by then SP chief Mulayam Singh to mobilise most backward caste communities. He, however, lost in 2017.

In a fresh list of 39 candidates, the SP has fielded BSP rebel Hakim Chandra Bind from Handia, Prayagraj, and BJP rebel Madhuri Verma from Nanpara in Bahraich. Both are sitting MLAs. The list is dominated by non-Yadav OBC and Dalit candidates especially from the Pasi and Kurmi castes.

It features candidates in 11 reserved seats including senior Pasi leaders Avdesh Prasad from Milkipur in Ayodhya and Inderjeet Saroj in Manjhanpur in Kausambhi. Mr. Saroj, a former BSP Minister, had unsuccessfully contested the 2019 Lok Sabha election. In Hardoi, the party fielded Usha Verma, former Lok Sabha MP and also a Pasi, from Sandi. Pasis are the second largest Dalit community in U.P. and found in large numbers in central parts of the State around Lucknow.

In Ayodhya, the SP fielded Tej Narayan Pandey alias Pawan Pandey, who ended the BJP’s long streak in the constituency in 2012 but lost in 2017. A Brahmin, he was also a Minister in the Akhilesh Yadav government and has been vocal over the alleged corruption in the purchase of land for the Ram Mandir.

The SP has fielded Santosh Pandey, who recently built a statue for Lord Parshuram near Lucknow, in Lambhua in Sultanpur.