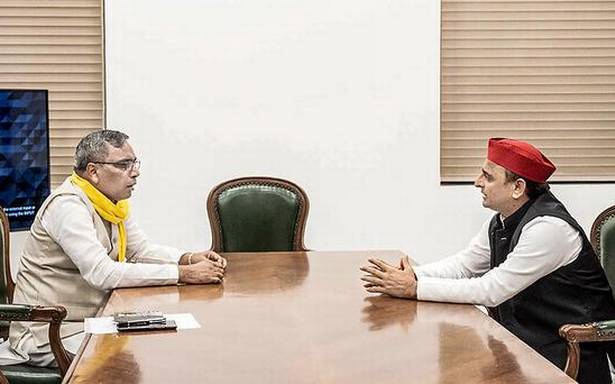 The two parties gave the slogan Khadeda Howe, a call to “drive out” the BJP from the State

The Samajwadi Party (SP) and the Suheldev Bhartiya Samaj Party (SBSP) on Wednesday announced their alliance for the 2022 Uttar Pradesh Assembly polls and gave the slogan Khadeda Howe, a call to "drive out" the Bharatiya Janata Party (BJP) from the State. The slogan is on the lines of Khela Hobe (game on), which was coined by the Mamata Banerjee-led Trinamool Congress for the West Bengal Assembly polls that saw the party defeat the BJP and storm back to power for a third consecutive term.

"Slogan Khela Hobe was given in West Bengal and didi drove out the BJP from the State. Similarly, in Uttar Pradesh it will be ‘Khadeda Howe’ (drive out) and the BJP government will be removed by the people of the state," Suheldev Bhartiya Samaj Party (SBSP) president Om Prakash Rajbhar said here.

He was addressing a ‘Vanchit, Pichhda, Dalit and Minority Bhagidari Mahapanchyat’, during which SP chief Akhilesh Yadav announced the alliance between the two parties for the Assembly polls.

"When BJP leaders come to your village, you should ask them about price rise and then ask them to leave," Mr. Rajbhar said.

When red and yellow colours of the SP and the SBSP unite, everyone knows who is becoming laal-pila (angry) in Delhi and Lucknow, the SP chief said in a reference to the BJP governments at the Centre and in the State.

"Mr. Rajbhar will close the door through which the BJP came to power (in Uttar Pradesh) and SP workers will lock it," he said.

"There was speculation before the alliance about which party will win how many seats. But after the alliance, even big agencies are saying no one can stop us," Mr. Yadav said.