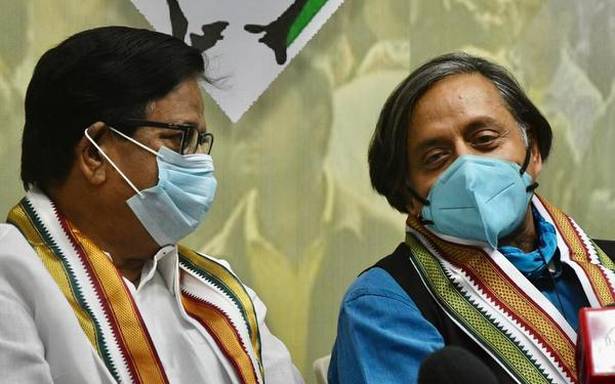 Mr. Tharoor pointed out that since May 4, fuel prices have increased 40 times, leading to higher prices of essential items

Congress leader Shashi Tharoor on Friday said it was unfair to expect State governments to cut Value Added Taxes on fuel, especially when Centre keeps most of the taxes by levying cess.

Speaking to reporters at the Tamil Nadu Congress Committee headquarters, Sathyamurthy Bhavan, he said that Tamil Nadu Finance Minister P. Thiaga Rajan had pointed out to him that the Centre has been levying cess on fuel and not sharing it with the States. “Cess is a very divisive idea, as it is not divisible with states. When the Centre keeps 96% of it with itself, then the onus is on them to reduce the taxes and bring down the prices,” Mr. Tharoor said.

He pointed out that since May 4, after State elections the fuel prices have been increased 40 times. Mr. Tharoor said the higher fuel prices are also leading to higher prices of vegetables, fruits, pulses and other essential household items, resulting in higher inflation.“This is not like ordinary inflation which happens in a healthy economy. The economy is under pressure and very little stimulus has been offered by the Modi government,” he added.

Mr. Tharoor alleged that the current situation is due to the misrule and mismanagement of the economy under the seven years of Modi government. He also pointed out that import duty on some essential items like palm oil, pulses have gone up and household items attract higher GST rates.

Mr. Tharoor urged the Centre to reduce taxes and cess on fuel significantly and also give a larger share to State governments. He also called for rationalisation of GST rates.

Issues to be raised in Parliament

The Congress party would raise the issues relating to higher fuel prices, higher inflation, mismanagement of COVID-19 situation and lower stimulus offered in the monsoon session of the parliament, which starts on Monday, Mr. Tharoor said. He also said issues of farmer agitation and the border situation with China would be raised and also a full-fledged investigation into the Rafale deal would be sought.

On Tamil Nadu seeking exemption from NEET, Mr. Tharoor said this has been raised by both the previous AIADMK and current DMK government.

“I am not aware of any other states expressing concern over NEET. There should be a discussion on concerns expressed by Tamil Nadu and a solution must be found taking into account the interests of students,” he added.

On the debate about Kongunadu, Mr. Tharoor said in the past division of States has been done in a smooth manner and only when the parent state wanted it. “In this case there is no such demand from the parent state or from people of Tamil Nadu,” he pointed out.

Mr. Tharoor also said an amicable solution should be found for the water dispute between Tamil Nadu and Karnataka.