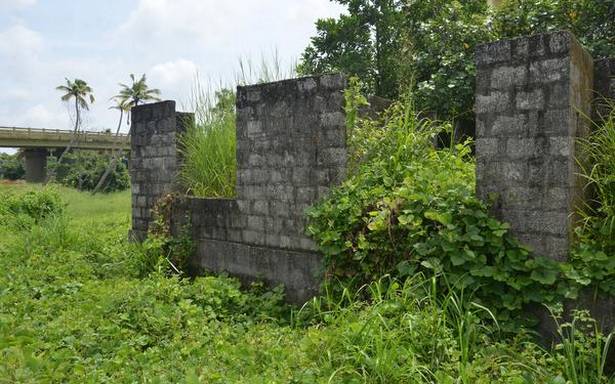 Out of the 316 families evicted from seven villages for rail-road connectivity of the Vallarpadam International Container Transshipment Terminal (ICTT), only less than 50 have moved to rehabilitation plots awarded to them in nearly 14 years since their eviction.

This was largely due to the marshy character of the reclaimed land and faulty land filling in at least four out of the seven rehabilitation sites because of which seven of the houses have either tilted to a side or developed cracks. In a report back in 2017, an Assistant Executive Engineer of the PWD Buildings Division had admitted as much.

No house has yet been constructed on the 15 rehabilitation plots at Mulavukad, while only five houses have come up on 13 plots at Moolampilly and three houses on six plots at Cheranalloor. Thirty-two houses have been built on 94 plots at Vaduthala, by far the best among the rehabilitation plots. At Kothad, Thuthiyoor, and Indira Nagar in Kakkanad, only two houses each have been built on 15, 56, and 104 plots respectively.

“Despite the PWD vouching for the suspect nature of the rehabilitation plots, nothing has been done to improve the fitness of the land. This was also in violation of the court direction that ‘A’ class land should be given for rehabilitation. Besides, some plots fall under the Coastal Regulation Zone because of which evictees are not willing to risk investing in constructing houses,” said Francis Kalathunkal, general convener, Moolampilly Coordination Committee.

Some rehabilitation plots lacked basic infrastructure too. For instance, a critical link road to the rehabilitation plots at Moolampilly linking it with the adjacent Container Terminal Road was opened only last month. This critical gap in access had been posing a major hurdle to evictees in bringing construction materials to the plots and had remained unaddressed despite inspections by officials.

“The rehabilitation package was announced by the government not out of goodwill but in the face of our stiff opposition. They [government] never wanted it, and that is reflected in the poor rehabilitation plots. Piling is needed for any construction on the plots at Moolampilly, while the compensation was hardly enough for that,” said Mary Francis, an evictee from Moolampilly.