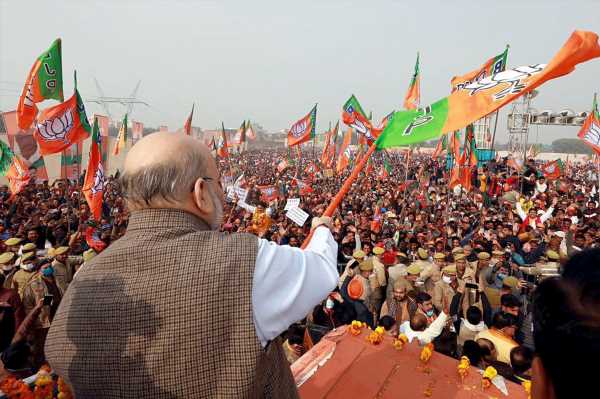 With the Election Commission imposing restrictions on poll rallies till January 15 in the wake of rising COVID-19 cases, political parties in Uttar Pradesh are gearing up for virtual campaigning.

While the Bharatiya Janata Party already has a good presence on social media platforms, the Samajwadi Party and others are putting in efforts to strengthen their digital army and chalking out strategies to boost their support base.

“We are miles ahead of rival parties in leveraging our social media presence. Further, we are working on a strategy for virtual campaigns,” BJP state media in-charge Manish Dixit told PTI.

The party has been telecasting key events and press conferences addressed or attended by party chief Akhilesh Yadav on its YouTube channel.

“It’s difficult to reach out to rural folk through digital platforms but the party is looking at the best possible ways,” SP national spokesperson Ashutosh Verma said.

“In rural areas, 40 per cent people do not use smart phones but the SP’s focus is on youths, who mostly have them (smartphones). The party has been creating thousands of WhatsApp groups in rural areas and adding youths,” Verma said.

The Aam Aadmi Party termed the EC’s directive for virtual campaigns a blessing and said it will use its experience in social media to whip up support.

The party’s state spokesperson Vaibhav Maheshwari said the AAP always believed in reaching people individually and social media was the best way to establish this connection.

“Our agenda includes power, water, health and education. Showing photoshopped images, creating hatred on temple-mosque issues is no longer liked by the people,” he said, adding the people are liking his party’s ideology.

He said in the past couple of days, virtual rallies of AAP’s Uttar Pradesh in-charge and Rajya Sabha member Sanjay Singh was attended by about 2 lakh people on various platforms.

He said the AAP will focus on local issues and that it has made separate social media cells for “Purvanchal, Paschimanchal, Bundelkhand and Madhyanchal”.

“These cells are preparing messages and memes in local languages,” he added.

Congress media coordinator Lalan Kumar said his party will keep the state’s burning issues before the people through social media.

“The party already has a strong presence on social media, but we are making extra arrangements for virtual campaigning,” he said.

“From the assembly to the booth level, the party has appointed social media in-charges with an objective to reach out to people with the party’s views on their issues,” Kumar said.