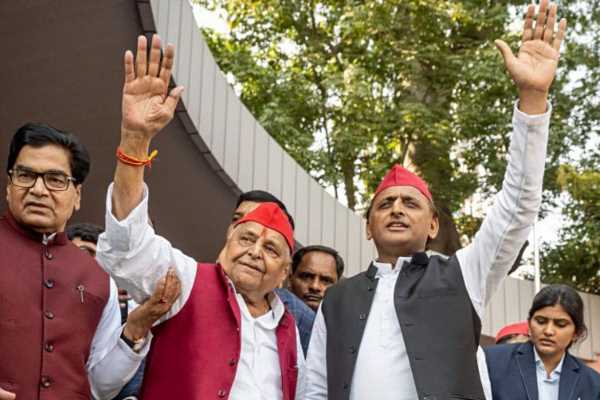 While Yadav began to tour different constituencies and address public meetings to mobilise the SP rank and file, he has concurrently started the tedious process of cobbling up an alliance of smaller outfits representing a mélange of castes and sub-castes, reports Virendra Singh Rawat.

In the run-up to the Uttar Pradesh assembly elections early next year, Akhilesh Yadav-led Samajwadi Party has thrown down the gauntlet before the formidable Modi-Yogi duo in the country’s most populous state.

While Yadav began to tour different constituencies and address public meetings to mobilise the SP rank and file, he has concurrently started the tedious process of cobbling up an alliance of smaller outfits representing a mélange of castes and sub-castes.

Interestingly, Yadav talked of accommodating the Pragatisheel Samajwadi Party Lohia, founded by his estranged uncle and former UP minister Shivpal Singh Yadav, although he had been non-committal earlier.

Besides, the SP enthusiastically announced a tie-up with the Suheldev Bhartiya Samaj Party, led by former UP minister OP Rajbhar, who had snapped relations with the Bharatiya Janata Party on the power-sharing issue.

Further, the socialist party has given strong indications of clubbing the Jayant Chaudhary-helmed Rashtriya Lok Dal in the pre-poll group to cash in on the perceptible Jat anger in Western UP over the farm laws.

After taking over the reins of the SP from his father and party patriarch Mulayam Singh Yadav in 2017, and after a protracted power feud with Shivpal, Akhilesh had pre-poll arrangements with both the Congress and the Bahujan Samaj Party in the 2017 UP assembly polls and the 2019 Lok Sabha elections, respectively.

However, the experiment failed to fetch the desired results and the SP saw its tally dwindle in the successive contests.

Smarting from the drubbing at the hands of the BJP, Akhilesh has astutely maintained equidistance from both the Congress and the BSP this time, and instead harped on formulating political equations with smaller parties. This is aimed at preventing a vote division.

According to reports, he is keen to help Ansari contest election either as an independent candidate or on the SBSP ticket.

Besides, Ansari’s elder brother Sigbatullah, a former BSP legislator, joined the SP in August in the presence of Akhilesh in Lucknow.

This is seen as consolidating the minority votes in favour of SP candidates in the Eastern UP districts, where the Ansaris wield influence.

The SP’s quest to rope in other ‘like-minded’ smaller outfits continues with the polls still three months away.

“We are open to allying with secular and like-minded parties to keep the BJP away from power. Our president (Akhilesh) has talked about these possibilities. The SP will uproot the BJP next year to save people from inflation, corruption, and bad governance,” senior SP leader and former UP cabinet minister Rajendra Chaudhary told Business Standard.

Meanwhile, SBSP national general secretary and chief spokesperson Arun Rajbhar said the party would fight the coming UP polls with the SP, and seat-sharing talks would be held next month.

“The SBSP is holding regional conclaves to galvanise different sections among the Dalit and backward communities, which were shortchanged by the BJP after assuming power. The saffron party gained power with their support, but they were not given due representation,” Arun Rajbhar alleged.

Meanwhile, Neeraj Rai, president of the Trinamool Congress’s UP unit, said any decision on a pre-poll alliance with the SP would be taken by Banerjee.

“We are expanding our district-level units in UP. Didi is expected to visit UP by the month-end or in the first week of December to hold a meeting with party leaders and take their feedback regarding the coming polls,” he added.

Other smaller parties are also in the fray. These include the Asaduddin Owaisi-led All India Majlis-e-Ittehadul Muslimeen and Vikassheel Insaan Party, founded by Mukesh Sahani, apart from the Aam Aadmi Party.

Two outfits — the Apna Dal (Sonelal) of Union minister Anupriya Patel and the Nishad Party of Sanjay Nishad — are aligned with the BJP.