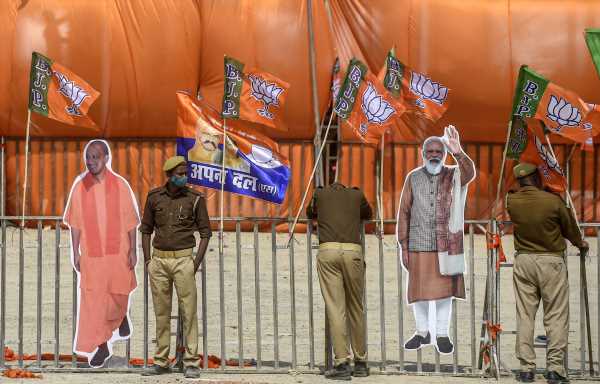 ‘Yogi was there, but ultimately the BJP got extremely worried and therefore Modi pitched in.’

Who should get the credit for the Bharatiya Janata Party’s stupendous success in the Uttar Pradesh assembly polls?

“It was felt that Modi did not have his heart and soul in the campaign. But eventually it became a threat as the SP expanded its social base. That is when Modi put his heart and soul in the campaign, which was from the fourth phase,” Nilanjan Mukhopadhyay — author of The RSS: Icons of the Indian Right and Narendra Modi: The Man, The Times — tells Syed Firdaus Ashraf/Rediff.com in the second part of the interview.

PART 1: ‘Ram and Roti evolved into Ram and Ration’

Does Yogi become No 2 in the BJP after the UP elections?

It will put the spotlight on the fact that the BJP does not have any successor plan.

Who is going to succeed is completely ambiguous in the BJP.

What are the qualifications to become a successor in the BJP?

There is no clarity in the BJP on this issue.

This is the problem that has been with the BJP since its inception.

We have seen this problem since the days of Atal Bihari Vajpayee and L K Advani.

This is the problem which was in the Jan Sangh and the RSS too right from the day when Keshav Baliram Hedgewar died and (Madhav Sadashiv) ‘Guru’ Golwalkar became his successor.

There is no transparency and we do not know whether there will be an immediate demand for this.

I don’t think so because even now there is Modi’s tremendous charismatic presence.

We also cannot ignore the fact that Modi will turn 75 in September 2025. So, this is a very fluid situation.

This retirement age, which was stated by Modi, which he brought in, is applicable to him too.

Is the UP victory attributable to Modi or Yogi?

It is definitely attributed to Modi.

Yogi was there, but ultimately the BJP got extremely worried and therefore Modi pitched in.

Initially, it was supposed to be a purely Yogi campaign.

It was felt that Modi did not have his heart and soul in the campaign.

But eventually it became a threat as the SP (Samajwadi Party) expanded its social base.

At that time Modi turned up and said defeat for Yogi was a defeat for him.

That is when he put his heart and soul in the campaign, which was from the fourth phase.

Did Covid restrictions and the digital campaign help the BJP as they are very good at it?

I think the nature of campaigning has changed.

Public mood is created by social media. And on social media the BJP has a clear advantage over its rival.

You wrote that for the BJP it was all about fixing the Muslims, putting them in their place. Can you elaborate on that? Do BJP voters go to the polling booth with this ‘fix Muslims’ thought?

There is a sense of satisfaction.

I told you earlier that the BJP has made criminals and Muslim synonyms in UP elections. This is the success of the BJP’s campaign.

What about the farmers’s protest against the farm laws and Jat-Muslim unity in western UP? None of this seems to have worked for the SP and Rashtriya Lok Dal.

A large number of people unite when it comes to occupation and class on economic issues.

But when it comes to voting, they vote on their identity and faith.

Take Muzaffarnagar in western UP which was the hub of farm protest against Modi’s farm laws. It ended up voting for the BJP.

Why didn’t the Jats move to the SP and RLD as expected before the elections?

They voted on religious identity and it is possible the Jat community voted as Hindus and not as farmers.