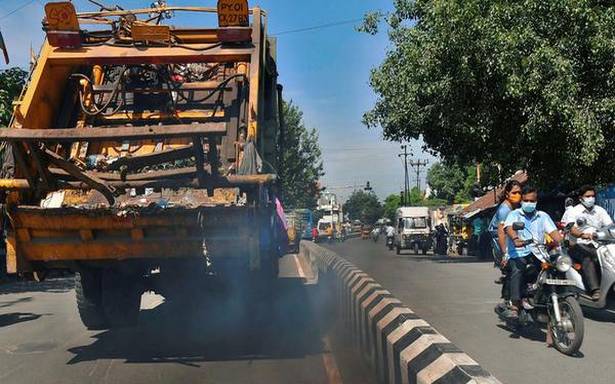 Poor enforcement of emission standards, shortage of manpower, badly planned bus services are some of the major contributors to the problem

Unchecked pollution from vehicles, including those owned by government departments, old and condemned private vehicles, has resulted in deterioration of air quality in the city, posing a health hazard.

In spite of Puducherry having over 15 emission testing centres, there are vehicles, which are too old to be roadworthy but are used here with impunity. Government vehicles, especially buses, compactors, old tempos and cars more than two decades old, have been a major source of pollution in the town. A large number of two-stroke engines continue to operate, contributing significantly to air pollution, planners say.

“The vehicles have poor fuel-efficiency and release semi-combusted fumes. On Kamaraj Salai, one can spot the movement of compactors with high emission of black smoke while collecting garbage from the town,” an urban planner said. “Strangely, such vehicles continue to operate without any trouble. A majority of them do not even bother to get their emissions checked. Public transport plays an effective role in curbing pollution, and the time has come to encourage environment friendly transport systems,” he added.

Officials admit that there were a number of old and condemned government vehicles that significantly contributed to the rising pollution.

The vehicles are covered under Life Tax for a period of 15 years, and they turn up for Pollution Under Control (PUC) certificates only during renewal of Fitness Certificates (FC). While government vehicles, transport and non-transport vehicles must ensure they renew their PUC certificates regularly, private vehicles go unchecked and continue to pollute the town. A number of tempos, autorickshaws and cars continued to emit black smoke, polluting the city and calling into question the relevance of emission standards, officials said. According to sources, some old two-wheelers and tempos, which are no longer in production, use adulterated fuel, making pollution levels intolerable in the town.

According to T.P. Raghunath, Svarnim Puducherry, Sri Aurobindo Society, and member of the Alliance for Good Governance (AGG), “Complete breakdown of public transport system is one of the major issues. Bus services are not designed to be convenient, and many populated places are not serviced by them, forcing people to rely on private transport, which has increased vehicle density. Even the existing public transit systems are not regulated, and the buses do contribute to heavy emissions.”

“Goods vehicles, government vehicles, tractors and trucks which pass through the town are heavy polluters, and they continue to get ‘fitness’ certificates and not undergo any emission testing. Another big polluter are vehicles of the education sector which are sometimes condemned. Vehicles are repainted and re-registered too. Monitoring air quality and public sharing of such data at multiple locations will generate public awareness and identify hotspots. The data should be shared on public web-portals as well,” he said.

An official said that enforcement teams in association with the traffic police had been conducting emission checks at various places in town. However, shortage of staff was another reason for authorities being unable to check every vehicle for emissions.

“Though we have taken up the issue with the higher authorities several times citing health hazards, no action has been taken yet. The government should seriously consider the emission standards of vehicles before it renews FCs. The older diesel and petrol vehicles should be phased out, and the implementation of scrappage policy alone would help tackle the rising problem of air pollution,” an official said.