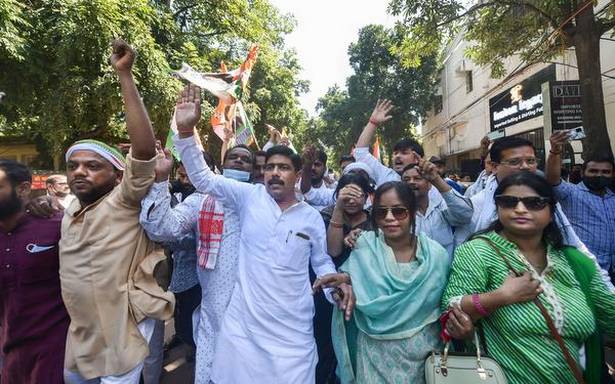 The Congressmen demanded a judicial probe into the case.

The Uttar Pradesh Congress on Tuesday staged a demonstration in Lucknow demanding the revocation of an FIR, accusing its former MP Pramod Tiwari of leading a mob of party men and assaulting BJP MP Sangam Lal Gupta and its workers during a function in Sangipur block of the Pratapgarh district.

Congress workers belonging to the district and city unit gathered at the Makbara Road in Lucknow and raised slogans against the U.P. government, a party release said, adding the party men also handed a memorandum, addressed to Governor Anandiben Patel, to her ADCP Rajesh Srivastava.

The party workers had a scuffle for about half an hour with the policemen on duty to hand over the memorandum, it added.

Speaking on the occasion, the Congress leaders said the government has been unnerved over the consistent unravelling of its failures by their party men.

They said the Sangipur incident is just an example of how the police and administration are being used to terrorise Opposition leaders and implicate them in false cases.

Similar protests were also held in other districts of the State, a party spokesman said. UPCC president Lallu had on Monday given a call for a Statewide protest against the Sangipur incident.

BJP’s Pratapgarh MP Sangam Lal Gupta had on Saturday accused Mr. Tiwari of leading a mob of his party workers to beat him up and his party’s activist during a government function in Sangipur block of Pratapgarh district, prompting the police to register cases against several persons including the senior Congress leader Aradhana Misra.

The BJP MP had alleged that the incident happened when he and his party workers reached the ‘mela’ venue in Sangipur, where former Congress MP Tiwari was sitting on the dais.

“Seeing me at the venue, Mr. Tiwari and his supporters first began hooting at me and our workers. Later, they grew violent and attacked us,” he had said. “They beat me up too and tore my kurta,” he had said.