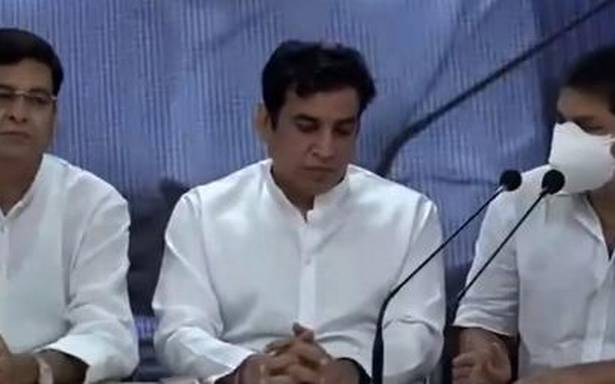 Party says BJP has not delivered on promises made to voters

The BJP, instead of delivering on its tall promises made to the Uttarakhand voters, has given the State a long list of former Chief Ministers, the Congress said on Saturday, a day after Chief Minister Tirath Singh Rawat resigned, cutting short his four-month-long tenure. The State now awaits the third BJP Chief Minister since the 2017 Assembly poll.

The Congress also questioned if the BJP was sacrificing Uttarakhand in an attempt to fix Trinamool Congress leader and West Bengal Chief Minister Mamata Banerjee.

Ms. Banerjee also faces a similar predicament as Mr. Rawat. She lost the Nandigram seat to TMC rebel Suvendu Adhikari in the poll and, to retain the Chief Minister’s post, she has to get a berth in the State Assembly within six months.

Mr. Rawat, who continues to be a Lok Sabha MP, was hand-picked by the BJP’s central leadership to replace Trivendra Singh Rawat, who had a run-in with the RSS and many other leaders within the BJP.

The high drama going on in Dehradun was an insult to the people of Devbhoomi (holy land) of Uttarakhand, Mr. Harish Rawat said at the press conference held at the Congress headquarters.

“Prime Minister Narendra Modi promised a double-engine government to the State, with the BJP in power in Dehradun and Delhi. But instead what we got was a long list of former Chief Ministers,” Mr. Harish Rawat said.

The BJP has ruled the State for two terms now. There have been eight Chief Ministers in these two terms, Mr. Rawat pointed out.

Taking a dig at the BJP, party general secretary (communications) Randeep Surjewala asked how the party, if it could not even pick its Chief Ministerial candidate, could administer the State or the nation.

Deputy LoP Mr. Mahra said the target was not Tirath Singh Rawat. “The target here is Mamata Banerjee. Prime Minister Narendra Modi could not tolerate the way she challenged him and won the West Bengal Assembly polls, belying all their expectations,” he said.

Mr. Tirath Singh Rawat was sworn in on March 10 and as per law had to be elected to the State Assembly within six months. Though two Assembly seats of – Gangotri and Haldwani – were vacant, as per the Representation of the People Act, a byelection for a seat should not be held if the term of a House is less than a year.

The State goes to the polls next year.

Congress State unit chief Pritam Singh pointed out that the BJP’s claim that the COVID pandemic had forced them into this legal bind was misleading.

“He had the chance to contest the Assembly seat in April. Why didn’t he do it?” he questioned.

Mr. Singh also read out a long list of failed promises of the BJP, including waiving of the farmers’ loans, and said it had not been done even after four-and-a-half years.

“A murder case must be registered against the BJP government for their negligence during the Maha Kumbh. The event was a superspreader that took the lives of many,” Mr. Singh added.

He also pointed out that both BJP Chief Ministers had been involved in corruption cases, including the latest one on fake COVID tests.

Though the Congress is pointing fingers at the BJP, its own house is far from organised. The party has not been able to elect a leader of the Congress Legislature Party (CLP). The post fell vacant after the death of Indira Hridayesh. There is a tussle going on between State chief Mr. Singh and Mr. Harish Rawat over the choice of the candidate for the post.

Mr. Yadav said that the party would take its time, consult everyone and democratically elect the CLP leader soon.