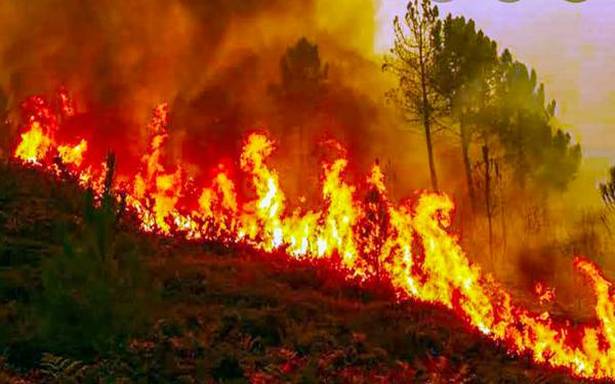 State government could have prepared itself better, say environmentalists

The video of Uttarakhand Environment Minister Harak Singh Rawat, which shows him trying to douse a forest fire with a bush in Chamoli district on Monday, that spread like wildfire on social media put the spotlight on a major issue being faced by the hill State that boasts of around 70% forest cover.

In the last 24 hours, according to official sources, 75 incidents of forest fire — 50 in forest reserves and 25 in civil or van panchayat areas — had been reported affecting 105.85 hectares of forest land.

In what is being seen as an unprecedented April, 414 incidents affecting 645.3 hectares, have been reported in the first six days of the month.

Rajiv Bhartari, Principal Conservator of Forests held the high fuel load and consistent dry weather responsible for the high number of fire incidents. “Incidents of forest fire usually happen in Uttarakhand between February and June. Last year, we had had very few incidents during this period. It led to an excessive fuel load,” he said. Then, he told The Hindu, incidents of winter forest fire were reported from October 2020 onwards because of dry winter which is becoming a norm in Uttarakhand because of climate change.

Environmentalists feel the State government could have prepared itself better. Anoop Nautiyal, founder of the Dehradun-based think tank Social Development for Communities Foundation, said when the first fire was reported in October 2020, the government should have known what was on the cards. “It is only April. What will happen in May and June when the temperatures soar further?”

After Union Home Minister Amit Shah’s intervention, two helicopters have been pressed into service and a team of NDRF has been stationed in Haldwani.

Mr. Bhartari said the fire had been contained on the ground and it has not risen to crown level in any of the districts. “There has been rain in Pithoragarh today [Tuesday] and in the coming two days, there is a forecast of light to medium precipitation in different parts of the State. We hope the situation would soon come under control,” he said.

Among other methods, Mr. Bhartari said they also lit up controlled fire in a forest strip to remove fuel from the path of the rampaging fire storm. “Sometimes, fire also helps in extinguishing fire.”

However, concerns have been raised on how the valuation of the loss from forest fire is done. According to the government bulletin, the loss in April is ₹14,18,909 from 645.3 hectares. Mr. Nautiyal said it roughly comes about ₹2,500 per hectare. “This is nothing when we consider the rich biodiversity a hectare or 15 bighas of forest land contains.”

He cited a report of a study commissioned by the Uttarakhand government in 2018. Conducted by the Indian Institute of Forest Management, Bhopal, the report evaluated the cost of ecoservices rendered by the State. “It said the monetary value of flow benefits from the Uttarakhand forests is approximately ₹95,112 rores annually. It is equivalent to an annual flow value of ₹3,88,085 per hectare of forest in Uttarakhand.”

Mr. Bhartari admitted that the parameters for valuation of loss from forest fire needed some amendments. “We will look into it but right now our focus is on dousing the fire,” he said.