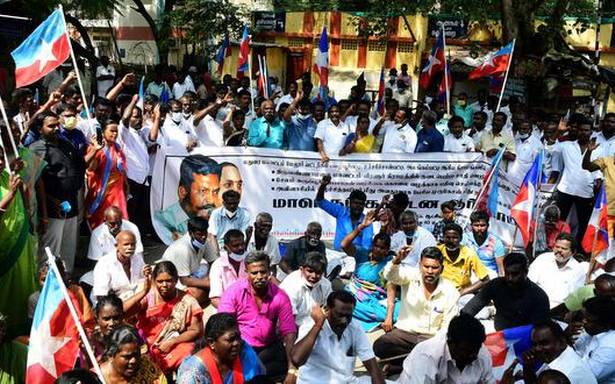 Mr. Inqulab said that caste Hindus took objection to the Pongal festival celebrations organised by people belonging to SC community in Uchcharichchanpatti and Pazhayurpatti on January 14 and 15 respectively.

The caste Hindus could not stomach the song praising Ambedkar and VCK leader Thol. Tirumavalavan played over public address system.

Dalit youths were beaten up and tied up in public places in both the villages.

In Uchcharichchanpatti they were let off only after their parents sought apologies from the caste Hindus.

“In Pazhayurpatti an ambulance that came to pick up the injured Dalit youths was turned away,” he said.

While the police arrested all the four Dalits named in the counter case, only two out of the 14 caste Hindus who were booked have been arrested so far.

Stating that elected representatives were also supporting such atrocities and the police personnel who belonged to the dominant caste were ignoring such atrocities, in a petition to the Collector, S. Aneesh Sekhar, the VCK leaders demanded action against the perpetrators of the crime and wanted to transfer police personnel who failed to act promptly.