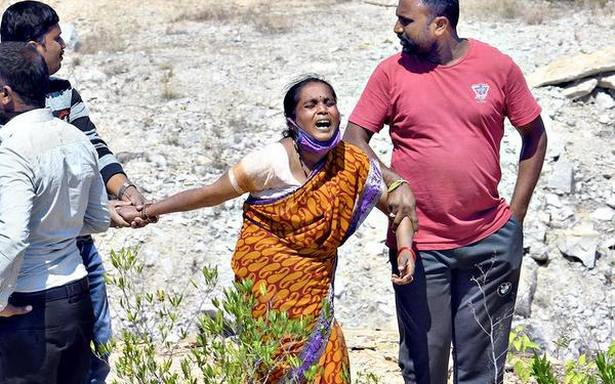 Residents of Hirenagavalli accuse leaders and officials of colluding with miners, leaving them high and dry.

“We have tried our best to stop stone quarrying on this hill. We held protests and later tried installing a Hanuman statue on the hill. But nothing has worked. The politicians and the bureaucracy are hand in glove with the miners,” lamented Venugopal Reddy, a resident of Hirenagavalli, the village where an accidental explosion at a stone quarry killed six in the early hours of Tuesday.

The tales of woe are not restricted to Hirenagavalli. Surrounding villagers too have complained of stone quarrying leading to constant sound, cracked buildings, respiratory disorders, and crop loss, leading to loss of livelihood.

“It has been years since I was able to harvest a good crop in my farm that abuts one of the quarries. While we were promised compensation, no one in our village has got it,” said A.K. Gangappa, a farmer.

The monolithic Hirenagavalli Hill (also locally called Mayalafakir Konda) is believed to be the site of a popular Telugu folk story of Balanagamma. It was the site of the annual village fair till 2011, which is when the government permitted stone quarrying of the hill. Today, more than 18 quarry pits and 44 stone crushers are mining the hill. “In a bid to stop the mining, we installed a Hanuman statue overnight. But that did not deter them. The statue is now at a nearby police station,” said Venkataramanappa, another farmer.

District in-charge Minister K. Sudhakar said he had earlier opposed mining on the hill since it was a rare monolithic hill that was also revered by the locals. “Chickballapur, being next to Bengaluru, has borne a disproportionate brunt of the development needs of the city. I will appeal to the government to limit the licences granted per taluk,” he said.

R. Anjaneya Reddy, a prominent irrigation activist from the district, said, “While stone quarrying has been happening for decades now and has also adversely impacted life in the district, what has worsened it is the M-sand units. Since boulders are anyway powdered to make M-sand, there are reckless explosions and the risking of life,” he said. He has filed a PIL petition challenging the recently passed Karnataka Regulation of Stone Crushers (Amendment) Act, 2020, in the High Court. “The amendment eases restrictions on the crushers, impacting the safety of workers and the public. The collusion of miners, politicians, and bureaucrats is evident,” he said.