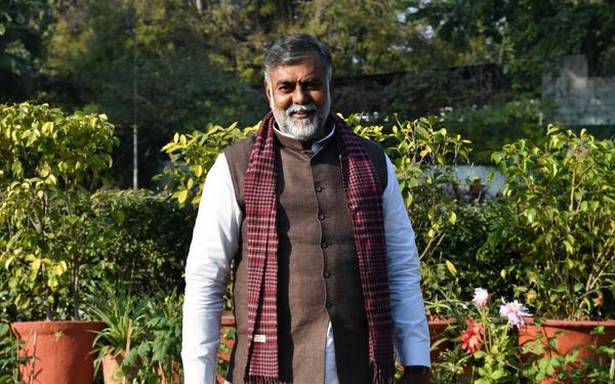 In the full video, the minister is seen asking the man not to use abusive language.

A day after a video surfaced purportedly showing Union Culture Minister Prahlad Patel telling a man who sought oxygen cylinder for his ailing mother that he would get "two slaps", his office on Friday said the clip was heavily edited to portray him in bad light.

Sharing the full video of the incident, a representative of the minister said Mr. Patel was only placating the man and reprimanding him for using an expletive.

In the full video, the minister is seen asking the man not to use abusive language and telling him that he would get a slap if he kept on abusing.

He is also seen asking the man who denied him the oxygen cylinder.

While the opposition Congress has took swipes at Mr. Patel over the incident after the edited clip was shared widely, the Union minister did not react to the accusations.

Mr. Patel, who is the MP from Damoh, was inspecting the district hospital there on Thursday, two days after oxygen cylinders were looted from the facility, his office said.

In the video, the man is seen approaching him and saying that his mother, a COVID-19 patient, needed oxygen cylinder.

She was told she would get one after 36 hours, but it is yet to be provided, the man can be heard telling the minister.

The man is next seen raising a finger at Mr. Patel and using an expletive, to which the minister gestures at him to lower his finger, and said, "If you spoke in this manner, you will get two slaps (Aisa Bolega Toh Do Khayega)." The man then replies that he is ready to accept the slaps. "Tell me what to do," he is heard asking.

"Calm down. Is anyone refusing you (the oxygen)," the minister asks.

To this, the man is heard replying in a feeble voice that he had indeed been denied an oxygen cylinder.

As the edited clip began to circulate on Thursday, MP Congress chief spokesperson K.K. Mishra tweeted, "Before the by-poll, each virus patient of Damoh was driven to Bhopal or Jabalpur by the cars of MP ministers and admitted to hospitals." "Now when a BJP activist was requesting for oxygen to save the life of his mother, Union Minister Prahlad Patel was talking about slapping him twice as the work is accomplished (election is over)," he said.

On Tuesday night, family members of patients admitted to the Damoh district hospital forcibly took away oxygen cylinders from the facility. The hospital management had to call in police to bring the situation under control.

No restrictions on movement or gatherings had been imposed in the district which had an Assembly by-election on April 17. On April 19, a curfew was imposed.