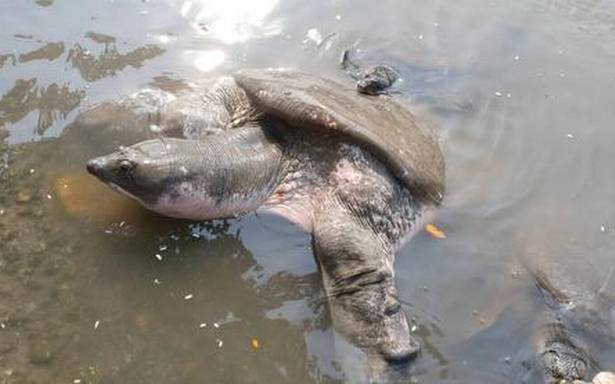 Two NGOs, zoo and Kamrup district administration sign pact with a major temple at Hajo near Guwahati for the project.

A vision document 2030 was also launched after Turtle Survival Alliance India and Help Earth signed the pact involving the Hayagriva Madhava Temple Committee. The temple, revered by both Hindus and Buddhists, is at Hajo, about 30 km northwest of Guwahati.

Until sightings along the Brahmaputra River’s drainage in Assam, the black softshell turtle was thought to be ‘extinct in the wild’ and confined only to ponds of temples in northeastern India and Bangladesh.

The International Union for Conservation of Nature had in 2021 listed the turtle as ‘critically endangered’. But it does not enjoy legal protection under the Indian Wildlife (Protection) Act of 1972 although it has traditionally been hunted for its meat and cartilage, traded in regional and international markets.

“Various temple ponds in Assam such as that of the Hayagriva Madhava Temple harbour various threatened species of turtles. Since the turtles are conserved in these ponds only based on religious grounds, many biological requirements for building a sustainable wild population have since long been overlooked,” Arpita Dutta of Turtle Survival said.

“This multi-stakeholder association (conservation pact) aims to restock the wild with viable, self-sufficient and genetically pure threatened turtle populations in the region. We will offer assistance for the required improvement of husbandry of turtles kept in such ponds, and further recovery efforts are recommended for the long-term survival and existence of the endangered freshwater turtles,” she added.

Kamrup Deputy Commissioner Kailash Kartik N. emphasised mass awareness on the conservation issues of all species of turtles in the region while working on threats and opportunities to strengthen the black softshell turtle population in Assam.

A proposal was also mooted for retaining the hatchlings from eastern Assam at the Nature Discovery Centre at Biswanath Ghat run by Turtle Survival Alliance India for proper upkeep and monitoring before they are released in the wild. Biswanath Ghat is about 240 km northeast of Guwahati.

Zoo director Tejas Mariswamy and Help Earth’s Jayaditya Purkayastha attended the programme on June 19 along with the key members of the Hayagriva Madhava Temple Committee.