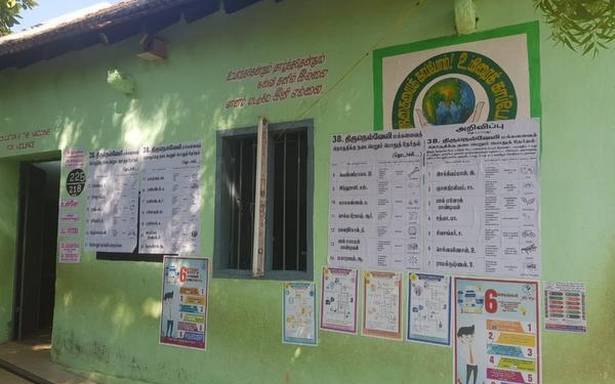 Some of the anganvadi and panchayat union school buildings in the district that received a fresh coat of painting, thanks to sponsors, face threat of defacement during this Assembly election.

Earlier, these buildings in Veeravanallur presented a pathetic sight, which prompted then Inspector Samson, a wildlife rescue expert, to approach his friends in Tirunelveli and Kanniyakumari districts.

When they came forward to bear the expenditure of painting the buildings, it was decided that the effort should also educate the children about nature, wildlife conservation, tree planting and so on.

These themes took the shape of colourful pictures on the walls of the anganvadis and schools, leaving teachers, students and parents amazed. The trend started to spread wherever sponsors could be found. For instance, two schools in Melapalayam and Reddiyarpatti on the outskirts of Palayamkottai were painted like train coaches with locomotives.

“Election posters carrying names of candidates, their symbols and other information are pasted on these beautifully painted walls. They leave the paintings badly damaged after they are removed. It happened during the Lok Sabha election in 2019 and our buildings are facing a similar threat again,” said a teacher of a panchayat union primary school in Cheranmahadevi block.

“The posters, instead, can be put up in front of the booths,” she added.

The teacher’s worst fears came true when polling material arrived at the new-look schools on Monday evening. Polling personnel hurriedly put up posters on the walls carrying pictures and left the spot.

“Our schools remain closed due to COVID-19. If these posters are removed after the election, we request them to do it with utmost care so that the paintings are not damaged,” the teacher said.