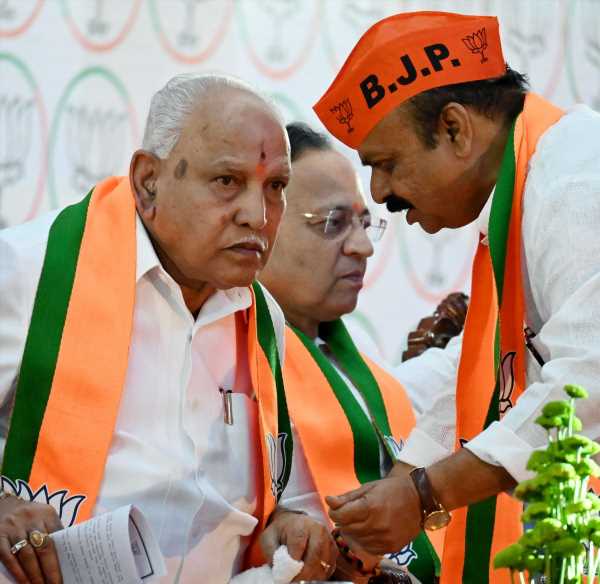 Sniping at the senior BJP leadership has reached a new high in Karnataka.
For the moment, there is a truce, but the party knows the damage it could do ahead of the polls, reports Aditi Phadnis.

For a party (and government) that has barely five months left to face an assembly election, the Bharatiya Janata Party appears remarkably confident about its plans for Karnataka.

Despite the general expectation that Union Home Minister Amit Shah would inaugurate the state executive last month, he did not show up and instead elected to travel to Gujarat and Jammu to hold meetings with party office-bearers and BJP leaders.

He sent General Secretary Arun Singh to the Karnataka meeting.

This left local leaders cold: Most of them left the venue after lunch, with Chief Minister Basavaraj Bommai himself skipping part of the proceedings because he had to dash to an all-party meeting he had called.

But that didn’t stop Mr Singh from gushing in interviews that Mr Bommai will be the party’s chief ministerial candidate in the upcoming polls.

‘They (the national leadership) are very happy with Mr Bommai, the kind of work he is doing,’ Mr Singh told a news agency in an interview.

Former chief minister B S Yediyurappa, recently elevated to the BJP’s parliamentary board, a move that ends his chances of ever becoming chief minister again, however, sounded a note of caution at the meeting.

‘Only five months are left for the polls. If ministers and legislators tour for five months, they can be in power for five years,’ he said.

What the workers took away from this was: It is now each man for himself and the sooner they hit the ground, the better.

Sniping at the senior leadership of the party has reached a new high in the BJP in Karnataka.

Reacting to a proposed Yediyurappa-Bommai joint yatra across the state, Mr Yatnal said: “The BJP will bite the dust if Bommai tours the state in the company of Yediyurappa.”

Other equally belittling statements (none of them countered by any office-bearer) have left the Opposition grinning.

Mr Yediyurappa’s supporters believe leaders like Mr Yatnal could not have made such statements without the tacit support of the high command.

State BJP President Nalin Kumar Kateel’s term ended in August. There appears to be no move to appoint a successor.

Mr Kateel belongs to the Dakshina Kannada region but is not that well known elsewhere in the state.

He inaugurated the BJP’s ‘war room’ for the elections — except that the war seems to be raging inside the BJP!

Infighting is not new to the BJP in Karnataka, especially after its spectacular growth since L K Advani’s rath yatra in 1990.

The idea of Hindutva caught the imagination of the Bengaluru hoi polloi and till today the city remains an unassailable BJP bastion.

But more importantly, leveraging Hindutva, the BJP consolidated the wealthy and powerful Hindu temples and mutts.

Mr Yediyurappa played a signal role in this, even making budgetary allocations for mutt renovations.

He’s the one who won over to the BJP the support of the Siddaganga matha in Tumkur district.

At one stage the growth of the BJP was so rapid that it didn’t have the candidates to field in elections and had to ‘import’ outsiders.

Mr Yediyurappa’s methodical building of the party, particularly in the Malnad areas (Coorg, Shimoga, and Chikmagalur districts) and the Hubbali-Dharwad region, made him an important organisational pole of power.

By 2004, the party, largely by dint of Mr Yediyurappa’s efforts, managed to make a dent in western Karnataka and especially the Hyderabad Karnataka regions.

Mr Yediyurappa reckoned he had established his sway and wanted all his detractors banished.

Mr Yatnal, who had considerable standing in northern Karnataka, was expelled from the BJP to appease Mr Yediyurappa. Hence his current outbursts against him.

These two men are now implacable adversaries of Mr Yediyurappa.

Mr Bommai is trying hard to balance all the factions, but has his work cut out for him.

He has an important spokesman in Delhi who supports him: Union Minister for Parliamentary Affairs Pralhad Joshi, the new man to watch from Karnataka.

In the coming days and weeks, the BJP has to work hard to retain the gains it has made and make new ones.

The party has noted the Congress’s outreach via the Bharat Jodo Yatra.

Now, with the appointment of Dalit leader Mallikarjun Kharge as Congress president, it will have to work harder.

In the 15 Scheduled Tribe seats, the Congress won eight and the BJP six.

Here too, the party will have to work to retain and grow its hold.

Mr Yediyurappa is acutely conscious of the honour his elevation to the parliamentary board represents.

But this can become meaningless if sniping continues and infighting is not controlled.

The party knows the damage he can do if he’s outside the tent — the BJP’s results in the 2013 assembly elections after he walked out of the party the previous year proved that.

For the moment, there’s a truce: But if it becomes any un-easier, the BJP could suffer reverses.