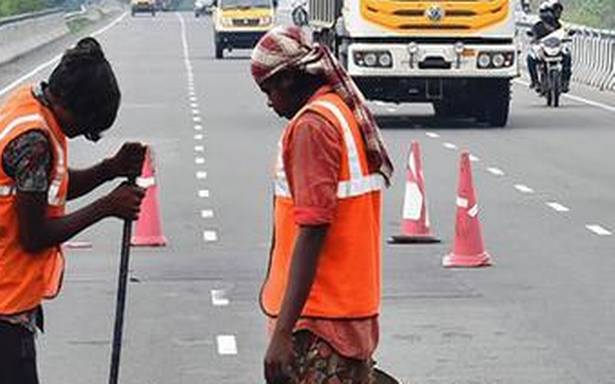 While water receded in a majority of the inundated areas in Chennai, many localities continued to reel under the impact of stagnation even two days after heavy rains battered the city.

Major stretches of Kavignar Bharathidasan Road, its adjacent Tiruvalluvar Salai and Seethammal Colony, all barely one km away from Chief Minister’s residence, had stagnation on Saturday.

Despite being under the focus of officials, there was water stagnation in some sections of T. Nagar, West Mambalam and Mandaveli.

In Peravallur near Perambur, one of the worst-affected localities, residents complained that the situation worsened on Saturday.

K. Ravi, a resident, alleged that water stagnation in Jawahar Nagar increased as water pumped out from nearby localities reached it.

Jennifer, a resident of Poompuhar Nagar in Thiru Vi Ka Nagar zone, said that water-logging persisted in her area for a week. “Residents in areas like Poompuhar Nagar 2nd Main Road, 28th Street, 28th Cross Street, 22nd Street, Yamuna Nagar and Vasantham Nagar are facing hardship. We do not have access to water and are finding difficult to come out for essentials like milk, water cans and groceries,” she said.

Residents of Valliammal Nagar in Villivakkam and members of Democratic Youth Federation of India staged a demonstration on Saturday, alleging inaction to drain water from the locality. Residents of Kalakshetra Colony near Adyar complained of water stagnation for nearly a week in the locality.

Chandrasekar, a resident of Vembuliamman Koil Street in Virugambakkam, said although there was not much water on their street, they were afraid that the water on a vast open land would overflow and flood the locality. “Water from residential localities around Ramapuram are emptied onto this site,” he said.

Water stagnation persisted in some parts of Velachery on Saturday even two days after the rains had stopped. Udhayam Nagar, in east part of Velachery, and some parts of west Velachery comprising Padmavathy Nagar, Kalki Nagar, Muruga Nagar, Ram Nagar and Srinivasa Nagar, were reeling under floods.

In many localities, residents complained of mixing of sewage and stormwater.

K.S. Kannan, a resident of AGR Garden in Mettukuppam in Mugalivakkam, said flooding in addition to mixing of sewage was posing a risk to public health. “We have complained to the Corporation and the officials of the State government. We have not received any help,” said Mr. Kannan.

Water was yet to be cleared from many localities on the peripheries of the city such as parts of of Mudichur and Hasthinapuram. In Hasthinapuram, sewage network started overflowing creating a health hazard in some areas. The sewers in Nethaji Nagar, Jain Nagar Extension and Arul Murugan Nandanavanam Nagar were oozing out sewage.

T. Murugesan, a resident of Jain Nagar Extension, said the residents often faced sewage overflow in the the past two years but the issue was yet to be fixed.

In Mudichur, areas like Rayappa Nagar, Varadharajapuram and Bhuvaneshwari Nagar were flooded although the situation was gradually improving.

V. Rajasekaran, an office-bearer of Mudichur Residents Welfare Association, alleged that though a lot of amount was allotted to strengthen the bunds of the Adyar river and construct integrated stormwater drains, no work was actually done.

(With inputs from Deepa H. Ramakrishnan and R. Srikanth)