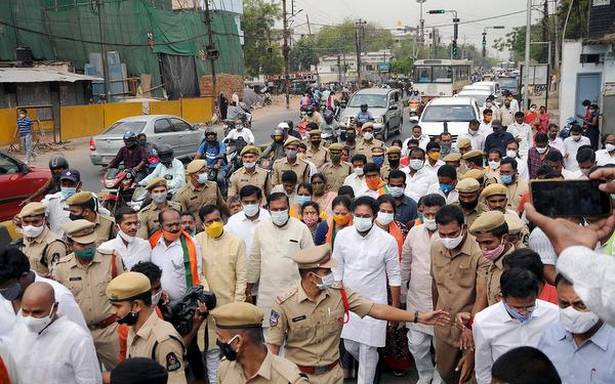 He pursued the matter seriously after joining the Union Cabinet

The much-delayed flyover works at Amberpet are likely to start again with most of the land acquisition completed, save for seven structures including a couple of religious structures and private properties. Once the underground utilities like water pipelines are relaid and high-power electric cables are shifted, the piers construction could begin, according to Union Minister of State for Home G. Kishan Reddy.

Talking to the media after inspecting the area along with officials on Thursday, the Union Minister said the Centre had already agreed to do the entire project estimated at ₹500 crore upwards from start to finish and had also agreed to share cost of land acquisition as well as shift of utilities like power lines, water pipelines and others.

While the work has been proposed originally when he was local MLA, he took it up more seriously after he had joined the Union Cabinet and had communicated with Chief Minister K. Chandrasekhar Rao, Municipal Administration Minister K.T. Rama Rao and officials concerned with most of the 250-odd properties taken over.

Mr. Reddy explained that the road widening work project was taken up from Chaderghat to the Singapore Township yet, the stretch near Sriramnagar could not be taken up due to graveyards on either side of the road. After several consultations with the previous governments, a decision to construct a flyover at Amberpet was taken.

The project received a fillip when Union Minister Nitin Gadkari was invited to lay the foundation stone for the same but the work got delayed due to funds crunch and need for properties acquisition though the Centre had offered to bear part of the cost, he said.

The Union Minister shared that the Centre would also bear the cost of ₹2.64 crore for shift of power lines and ₹8 crore for pipelines shift and called for speedy clearances from the departments concerned. The Hyderabad Metropolitan Water Supply & Sewerage Board (HMWSSB) had already given the permissions, it was yet to be obtained from the TS Central Power Distribution Limited (TSCDPCL).

He also appealed for cooperation from people living in the area as the traffic would have to be diverted to take up the works. Coordination meetings are necessary among officials drawn from various departments to ensure that the works went on a war footing. He would hold another high-level meeting of all concerned including GHMC, R&B department, National Highways Authority of India (NHAI), Traffic Police and others. Another road widening work till the Uppal metro rail station from Ali Cafe had been pending and would also be expedited.