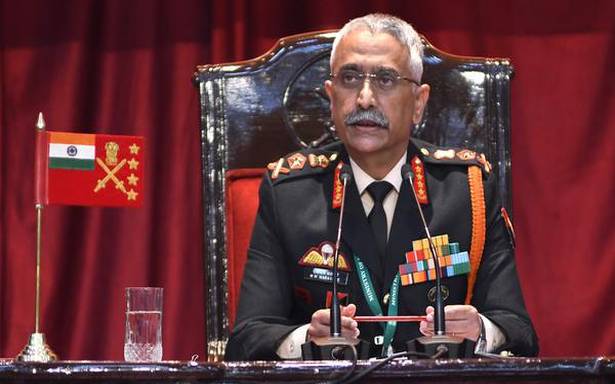 Chief of the Army Staff Gen. Manoj Mukund Naravane on Friday said he expected women cadets to be welcomed with the same sense of fair play and professionalism that the Indian armed forces were known the world over, while asking cadets to focus on professional development.

Gen. Naravane was the Reviewing Officer for the Passing Out Parade (PoP) of the 141th course of the National Defence Academy (NDA) in Pune’s Khadakwasla, which concluded amid a dazzling display of military skill and martial power at the Khetrapal Parade Ground.

“As we open the portals of the NDA to women cadets, I expect you all to welcome them with the same sense of fair play and professionalism that the Indian armed forces are known for the world over,” said the Army Chief, while addressing the cadets.

Impressing upon them the need to focus on professional development even after passing out of the academy, Gen. Naravane noted it was important for the officers-to-be to be au courant with the latest technologies.

“As cadets, we often harbour the impression that serious studies are behind us now. However, one must focus on professional development, given that niche technologies are transforming the character of war faster than ever before. Therefore, it is very important to keep abreast of these changes through regular professional education. Physical stamina must be matched with technical prowess and a constant thirst for knowledge,” Gen. Naravane advised, adding knowledge without imagination was no good.

Stating that the NDA was a cradle for leadership of the armed forces of the nation, he exhorted the cadets to constantly remind themselves of the academy’s motto of ‘service before self’ and adopt it as their guiding mantra.

Underscoring the need for harmonious coordination among the different services of the armed forces, Gen. Naravane reminded the cadets, who would be going into their respective service academies, that “no single service by itself can fight and win modern wars.”

The Army chief, an NDA alumnus of the 56th course, congratulated the cadets on their “precise drill movements” and “flawless display”.

“A little over 42 years back, when I stood as a cadet at the same drill square as you stand today, little could I have imagined that one day I would be reviewing this magnificent parade,” he said.

“It brings to mind that the more things change, the more they remain the same. Even as the flypast is testament to the changing character of war, the parade is testimony to the fact that boots on the ground are as relevant today as they were four decades ago,” Gen. Naravane observed.

The event was conducted under strict COVID-19 guidelines. Last year, the parade was held in a scaled-down manner, with the pandemic and lockdown casting a long shadow.