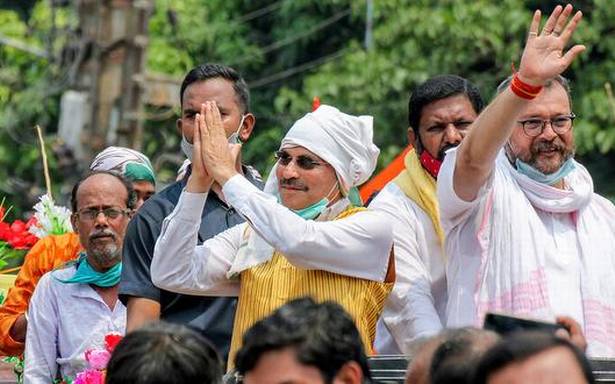 Campaign bells fell silent on Thursday evening for the fourth phase of election in West Bengal. Forty-four Assembly segments across five districts — two in north Bengal and three in south Bengal — will go to the polls on April 10. Eleven seats in South 24 Parganas, 10 in Hooghly and nine in Howrah will go to the polls in south Bengal, while voters across nine Assembly seats in Cooch Behar and five in Alipurduar district will also exercise their franchise. About 373 candidates are in the fray. About 1.15 crore voters are eligible to exercise their franchise across 15,940 polling stations on Saturday.

Among those contesting in the fourth phase are senior Trinamool Congress leader and Education Minister Partha Chatterjee from Behala Purba and Public Works Department and Sports and Youth Affairs Minister Aroop Biswas from Tollygunj in South 24 Parganas. Minister for North Bengal Development Rabindranath Ghosh is in the fray from Natabari in Cooch Behar and Minister for Agriculture Marketing Arup Roy is contesting from Howrah Madhya.

Three BJP MPs are contesting the Assembly polls in this phase. Babul Supriyo, MP from Asansol, is locked in a bitter contest in Tollygunj against Mr. Biswas, while Locket Chatterjee, MP from Hooghly, is contesting from Chinsurah in Hooghly district. Cooch Behar MP Nisith Pramanik is contesting from Dinhata. Another key BJP candidate is a former Minister in the Trinamool government, Rajib Banerjee, who is contesting from Domjur in Howrah.

The other Trinamool MLAs who are in the fray as BJP candidates include Prabir Ghosal from Uttarpara in Hooghly, Baishali Dalmiya in Bally, and Mihir Goswami from Natabari in Cooch Behar. In the Singur Assembly seat in Hooghly, which has witnessed a lot of political activity in the past two decades on the issues of land acquisition, return of land and the promise of industry, former Trinamool MLA Rabindranath Bhattacharya is contesting on BJP ticket.