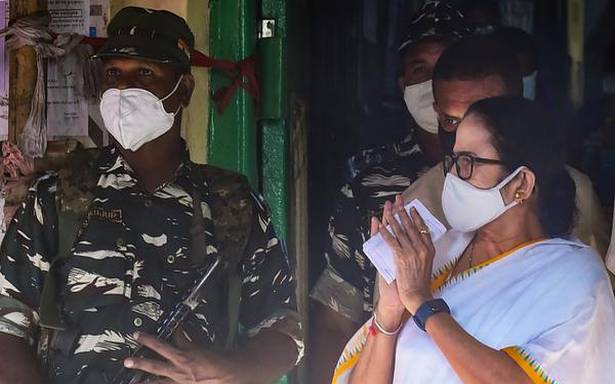 West Bengal Chief Minister Mamata Banerjee was leading by 6,146 votes in the Bhabanipur bypoll after the third round of counting on Sunday morning, as per the Election Commission.

The TMC was also leading in Murshidabad’s Samserganj and Jangipur where counting of votes for assembly elections was underway.

Ms. Banerjee, the TMC candidate in the Bhabanipur seat in south Kolkata, secured 9,974 votes, as per official data after the third round of counting.

Total 21 rounds of counting will be held in Bhabanipur.

In Samserganj, TMC candidate Amirul Islam was leading by 1,743 votes after the second round of counting. He secured 11,432 votes, while his nearest rival Zaidur Rahaman of the Congress received 9,689 votes.

Jangipur’s TMC candidate Jakir Hossain was leading by 1,717 votes after the first round of counting. Mr. Hossain secured 4,542 votes and his nearest rival, BJP’s Sujit Das, got 2,825 votes.

Voting in the seats was held on September 30.