The incident led to a stampede among people trapped under the scaffolding while PM Modi, who was still speaking on stage, tried to calm down the situation. Modi later visited the hospital and met the victims.

At least 30 people were injured after a scaffolding crashed due to heavy rains leading to a stampede during Prime Minister Narendra Modi’s rally at Midnapore college grounds in West Medinipur district of West Bengal on Monday. According to BJP leaders, 24 people were admitted at Midnapore medical college hospital. At least three persons are critical and have been shifted to surgical department and many amongst the injured victims are women.

“It happened so suddenly. As the structure broke down on us , first I was hit by a iron rod. I fell down on the mud. Then people ran over me and I list consciousness, ” said Swarno Mahato 55 year old who is a resident of Goaltore of West Midnapore district. She and other women including her elder daughter-in-law Sumitra came to Midnapore town in buses in the morning and waited for the Prime Minister to speak.

“I never imagined this would happen,” said Sumitra.

The incident led to a stampede among people trapped under the scaffolding while PM Modi, who was still speaking on stage, tried to calm down the situation. Modi later visited the hospital and met the victims.

“Prime minister met with the injured and told me to do whatever possible for their treatment , even we have to take some of them to hospitals in Kolkata,” added Ghosh. 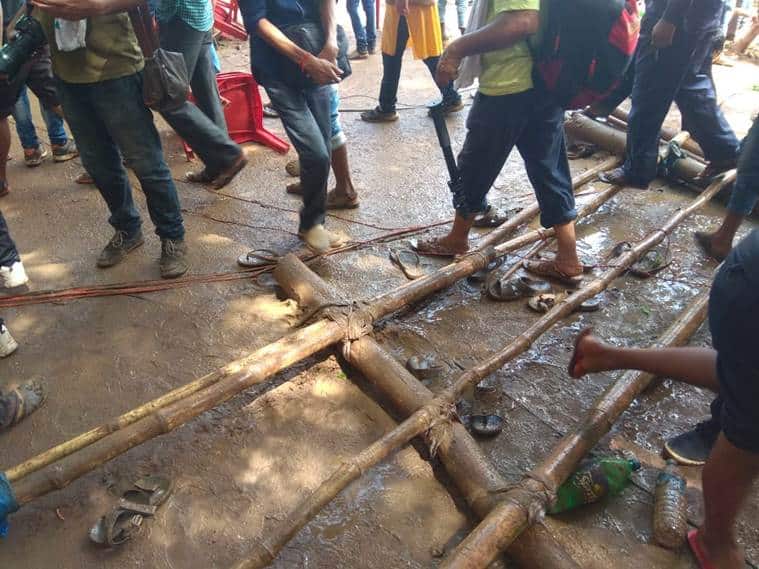 On the other hand, West Bengal Chief Minister Mamata Banerjee tweeted promising that the state government would provide medical treatment to the victims. “We pray for the speedy recovery of all those injured at the Midnapore rally today. The government is giving all help for medical treatment,” she said.

Prime Minister had targeted the Trinamool Congress supremo over the natural calamity saying that this was an indication for end of her rule. “I will never forget this day. I cannot imagine that even after 1/3rdof the people gathered in the rally coming under the crashed pandal, the rest of the crowd maintained discipline and did not panic. Mamata didi, look at the discipline and power of the people. The people who are not deterred by a natural calamity, how can your terror deter them?” he said.