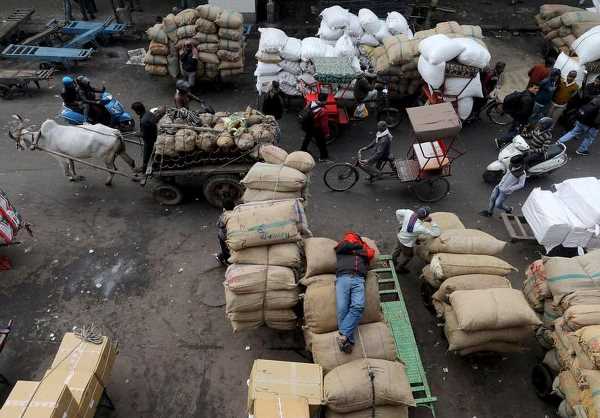 ‘How low GDP would have been, we don’t know.’
‘It raises serious questions because so many indicators are pointing to such a sharp decline and GDP estimates are still showing 4 per cent growth.’

Criticism of the current official gross domestic product (GDP) series is not new.

Many commentaries have put a question mark on the latest series since it was announced in 2015.

The current series has a different methodology to calculate GDP and its various segments when compared with the old one.

A recent presentation by former chief economic advisor Arvind Subramanian at the Indira Gandhi Institute of Development Research has reignited the debate on the latest GDP series.

It showed that GDP had contracted during 2019-2020, a pre-pandemic year, unlike the official version that showed GDP growth merely decelerated to 4 per cent during that fiscal year.

Subramanian and Felman presented their findings in a ‘posterity’ curve that they plotted using the numbers given by the National Statistical Commission panel, headed by Sudipto Mundle, during 2005-2006 and 2010-2011.

After that, Subramanian and Felman made estimates based on alternative indicators, such as IIP (consumption), IIP (investments), tax revenues, exports, imports, and credit.

To a query from Business Standard, Subramanian clarified: “These were estimates with uncertainty around them.”

In his response to a question as to how much had GDP contracted during 2019-2020, the former CEA further clarified: “I don’t have an exact number, but looking at all the other indicators it (GDP growth) should be negative. How much negative remains to be precisely estimated.”

All the indicators used by Subramanian and Felman declined during 2019-2020.

For instance, investments shown in the IIP contracted 7.1 per cent, and consumption in the index declined 3.8 per cent that year.

Besides the two segments of the IIP, imports declined 5.5 per cent, tax revenues slipped 4.6 per cent, exports dropped 1.9 per cent, and credit fell 1.4 per cent.

But are the conclusions arrived at by Subramanian and Felman appropriate and do other economists involved with GDP calculations concur with them?

He explained that the difference between the previous series and the current series is that in the former “you went essentially by physical output and then converted physical output to value, while in the new series you are measuring it in value terms”.

He pointed out that both indicators and current GDP series have uses.

“To conclude that the new GDP series is wrong because it is not in sync with what other data points are telling us — that is a statement that he (Subramanian) has been making for a while. That is wrong. My personal view is that his approach is wrong,” Sen stated. 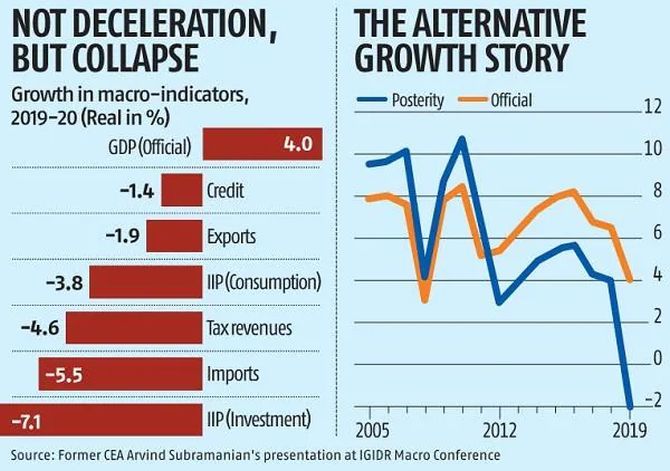 Sen said the question one should be asking is why indicators and GDP growth as measured by new series are diverging.

The reason why they are diverging is that there is an income distribution issue post-demonetisation, explained Sen, who is now director of India Programme of International Growth Centre.

The poorer people were hit much harder than the richer, Sen said, adding that there was an income distribution hit that had happened.

“You see what was happening; motorcycle purchases went down. The income distribution moves everything in the consumption basket towards higher value items, even as they may be the same in volume terms. People who were buying Maruti Alto could no longer buy them, but people who were buying Baleno could now afford to buy SUVs. That will show up in the GDP figures that are measured in value terms. That will not show up in physical terms,” Sen explained.

If one reads the GDP data with physical indicators, s/he would find that the composition of the consumption basket has changed post-demonetisation.

“Consumption has shifted from low-value products to high-value products because richer people have more money and the poorer have even less,” Sen said.

Mundle, who is now a distinguished fellow with the National Council of Applied Economic Research, complimented Subramanian for using “fairly robust parameters”, but cautioned that his posterity graph is a guess and does not portray actual numbers.

“I think he (Subramanian) is making a very credible case. However, what he shows as a ‘posterity’ curve is just an imagined curve. That is not an accurate thing,” Mundle said.

The data that Subramanian assembled certainly raises questions about the official series of GDP, not just for 2019-2020, but also for earlier years,” Mundle added.

N R Bhanumurthy, who was a member of the panel that made recommendations on back-dated GDP data based on the new methodology, said: “If you look at the (posterity) graph, he (Subramanian) was only extending the old GDP graph. He was trying to drag the old GDP methodology to a new database. In my view, the old and the new methodologies are not comparable. There are many differences, such as coverage of the sectors and different databases.”

Bhanumurthy, now vice-chancellor of the Bengaluru-based B R Ambedkar School of Economics, noted two things are happening — the government is doing the back-casting by using the new methodology on old databases for the pre-2011-2012 series and Subramanian is using the old methodology for forecasting GDP post-2011-2012.

The Mundle report gave its recommendations on the back-dated data on the current series in July 2018.

However, the the ministry of statistics and programme implementation later came out with its own back series data that depressed the GDP growth during 2005-2006 to 2011-2012 when compared with what the old series had shown and what the Mundle committee had recommended.

Bhanumurthy said there is not much difference between the numbers given by the Mundle panel and the official ones at the nominal level.

“It is only in the real numbers (after adjusting for inflation) that there is a difference,” he said.

It is basically inflation that accounted for the difference, Bhanumurthy pointed out.

What the official methodology did was first, it estimated nominal numbers and then it used deflators to get real figures.

It is more of a “deflated growth”, he said.

The Mundle panel retained the GDP deflators of the previous series and worked only on the nominal, while the revised official methodology worked on nominal, as well as on the deflators, he explained. 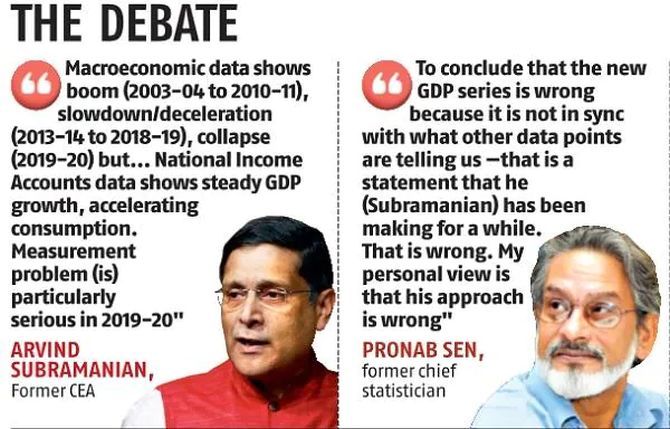