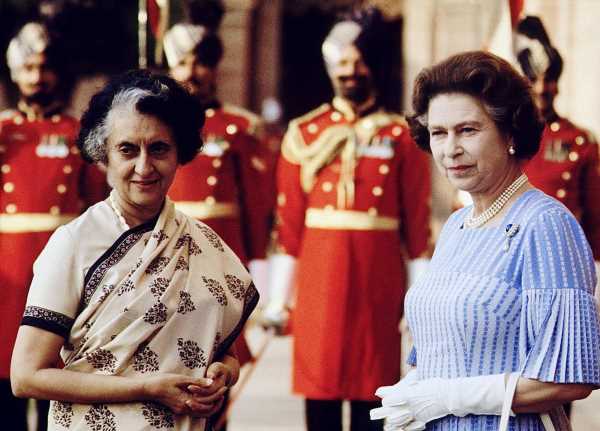 ‘I have never seen such a large parade being commanded with such precision just by a vocal word of command.’
‘I would like to import this technology to England.’
IAF Veteran Air Commodore Nitin Sathe, then a final year cadet at the National Defence Academy at Khadakvasla, remembers Queen Elizabeth II’s visit to NDA in November 1983.

We, the cadets of the 65th course at the National Defence Academy, were proud to see and interact with Queen Elizabeth II on her first and only visit to the academy in our 6th term in 1983 of which we have vivid memories.

A lot of hard work and toil was required on part of us to make sure that the queen went back suitably impressed with the future leadership of our armed forces.

While the NDA administration did what they had to do to apply spit and polish and plan the visit to the T, we were told that it was essentially ‘our show’ and the queen was specially coming to see us cadets.

As final termers, we were almost at the fag-end of our training, trying to enjoy the best part of our senior term and looking forward to our passing out parade at the end of the year, that, by the way, was to be reviewed by then Chief of Air Staff, Air Chief Marshal Dilbagh Singh.

The academy was, in true military style, bedecked for the occasion.

Whatever was static had received a fresh coat of paint, flowers blossoming in pots lined the roads, flags fluttered all over the academy and barricades came up overnight.

The atmosphere was electric, and that is an understatement. Having no access to television and a non-existent social media, we cadets had only ‘heard’ of the queen and seen pictures in print.

To see her live at the celebratory functions planned in her honour along with Prince Philip, the duke of Edinburgh, raised our excitement levels many a notch.

A grand parade was organised especially for the royals, which was to be commanded by our course-mate Ravneesh Aujla aka ‘Rocky’, who incidentally stood first in the order of merit later.

Post the parade, there was a ceremonial lunch planned in her honour where the 1,600 odd cadets and guests were to break bread together in true Brit style!

Whatever is done in the military is practised to perfection. The parade practice went on morning, noon and sometimes into late evenings till such time our adjutant was hoarse shouting at us atop his horse.

The horse and he would trot around the drill square moving between the multitude of rows and columns of boys in white patrol uniforms and see to it that no one shammed.

It was the first time a new ‘technology’ was being tried out on parade. The ‘white patrol’ uniform sported a white cotton tunic with gleaming brass buttons and other accoutrements; with the trouser of the same material held down with an elastic band which went around the shining black boots.

As the cadets were ordered a turn right or left, the flash of the shiny brass coming in and out of view of the audience was a mesmerising sight.

Whilst this movement was done in one smooth motion in normal course, there was a need to modify it to be done in a slow, deliberate and coordinated manner so that the moment could be savoured.

A new timing for the turns was incorporated; and it took some doing to practice the new technique.

During the turn, after one turned ninety degrees, the cadets were to freeze for a second or so, after which, in a swift moment, the boots were to come crashing down in unison- the metal undersides making a crunching sound on the tarmac.

When 1,600 of us stamped our feet together, what the audience heard was like a thunderous clap of thunder! 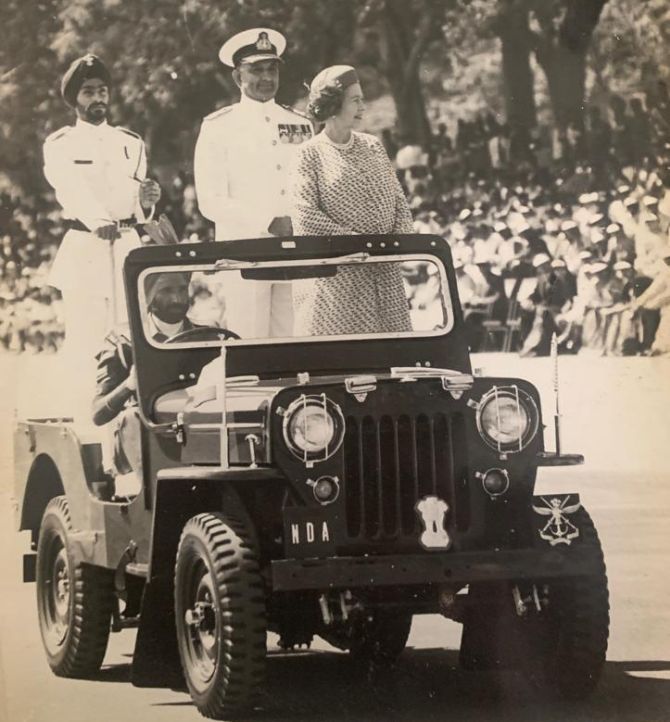 But there was another problem here, the sound of the boots had to reach the queen at the same time.

The parade was almost 600 metres long; the voice command by ‘Rocky’ Aujla took some time to travel that far and therefore the reaction of the farthest squadron was delayed by a few microseconds making the manoeuvre look shabby.

All the knowledge of physics and mathematics was applied so that the actions of all cadets appeared synchronised.

When the experiment found success after a few hits and trials, we were finally in sync with each other and the new ‘technology’ became second nature.

Her majesty arrived in a horse drawn buggy to the tune of the trumpeters and was received on parade by the commandant, Rear Admiral R P Sawhney, dressed in naval ceremonials.

And what a parade we presented to the royals! Everything, thank God, worked out beautifully well and her majesty surely was impressed.

Speaking on the occasion, she commented, “I have never seen such a large parade being commanded with such precision just by a vocal word of command. I would like to import this technology to England.”

An incident that occurred during the march-past is fresh in memory. Our squadron was following parade commander ‘Rocky’ Aujla. I was in the front column right in the centre of my squadron following Rocky’s footsteps.

As we turned to march past the dais, Rocky’s lanyard unhooked from his shirt pocket and the long cord swung along with his hands. There was no way he could stop swinging his arms since he was in view of the queen who he was to salute in a minute or two.

About 200 metres from the dais, our drill instructor, Subedar Lobhi Ram saab sprang out of the side gallery and marched smartly alongside Rocky, and, in a smart moment, made things right! 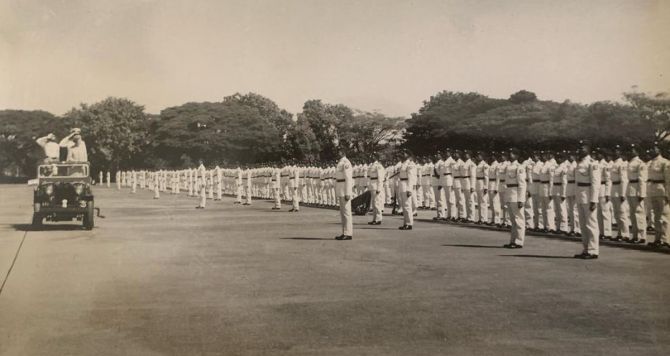 At the end of the parade, we witnessed the queen presenting mementoes to winners of the Victoria Cross, Britain’s highest award for military gallantry. These were brought in smartly on parade by our own cadet table orderlies who did their act flawlessly.

Prince Philip was thoroughly impressed with their drill and asked his ADC standing by his side to get some gifts to be given to the four boys carrying the table with the souvenirs.

Some of these ‘boys’ who have since retired from service, still have the pen set gifted by the royals.

P R Singh, another course-mate, narrates a funny incident during the parade: “I was carrying the championship banner and standing in front of our squadron. As the jeep carrying the queen and the commandant went past inspecting the parade, I was supposed to lower the banner to salute her majesty. So mesmerised was I looking at her, that I forgot to do it, getting the dirtiest of looks from the commandant traveling standing behind her in the jeep!” The amazing lunch! Sixteen hundred cadets waited behind their chairs at attention waiting for the queen and the duke to arrive for the six course meal.

There was pin drop silence inside, something we hadn’t experienced for a while.

As the royals took their seats, on cue, all of us were expected to pull our chairs back and sit down at our tables.

The manoeuvre of dragging the chairs without any screeching sound from the floor had been practised many times over and we had perfected this art of ‘noiseless seating’ by then! 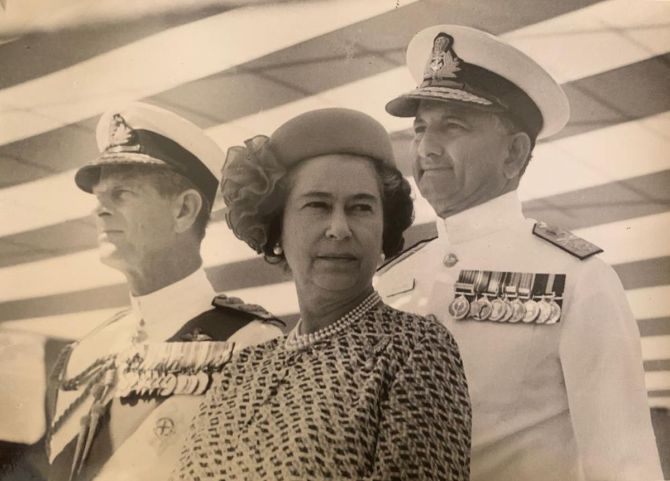 The lunch started with Mulligatawny soup followed by baked fish, chicken in some snazzy sauce and finished off with the famous trifle pudding, coffee and chocolate.

And yes, the band in attendance played a different tune with the change of each course.

Such a formal meal, not many of us saw ever in our lives again!

Eating had also been practised! We had a full dress rehearsal a few days before the main event.

The then minister of state for defence came to review all the arrangements and was to eat with us.

Then Major Ravinder Singh ‘Pickles’ Sodhi, the suave and dashing equestrian and our equestrian officer, doubled up for Prince Philip whilst his gracious wife Nafisa Ali stood in for the queen!

The rehearsal meal turned out to be quite a disaster with the minister coming in very late; and our grumbling stomachs and parched throats made us fidgety behind the tables staring at the soup going cold.

The minister was in no mood to eat, probably he didn’t quite relish the food on offer; and went through the motions of the meal at a rapid pace.

By the time our first spoon of soup went down our parched throats, he closed his plate forcing us to do the same.

I suppose he wasn’t briefed to take it slow so that we could eat; and at the end of it all, we felt cheated and hungry.

Thankfully, after he left, we were allowed to finish the left overs! We were the champion squadron and got to sit in the central lobby of the majestic mess from where we could see the royals eating.

Rocky Aujla, who sat next to the queen, recalls, “I don’t remember eating a morsel that afternoon. The queen saw that I was not comfortable and put me at ease with her charming banter.

“And she knew that the cadets needed time to eat to their hearts content and took her time closing her plate between courses,” Rocky remembers. “She asked me many questions about the training we were undergoing.” 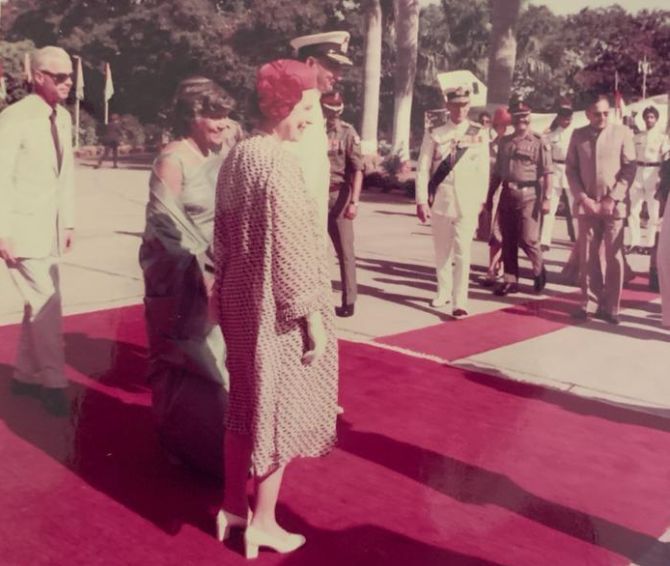 “We were to thump the tables when her majesty mentioned Lord Mountbatten in her speech,” Major General Raj Sinha, another course mate, tells me when we chat about the late queen’s visit to our alma mater.

“While we got used to the drill instructors saying the name during practice in ‘Indianised’ fashion — ‘Montbattin’ — we missed the cue in the queen’s speech and the mess didn’t quite reverberate the way it should have with 1,600 hands thumping the table in unison!” Raj recalls The queen and prince, we were told later, were to celebrate their 36th wedding anniversary during their visit to India and were due to visit a church in Secunderabad after they left Pune.

Their visit to the NDA was indeed one of the high points of our training. more so, because the commandant was magnanimous enough to waive off all our punishment runs due to our contribution to the success of the event!

As we went through our careers in the Indian Armed Forces, we always have had an anecdote or two to share about that morning of 21st November 1983.