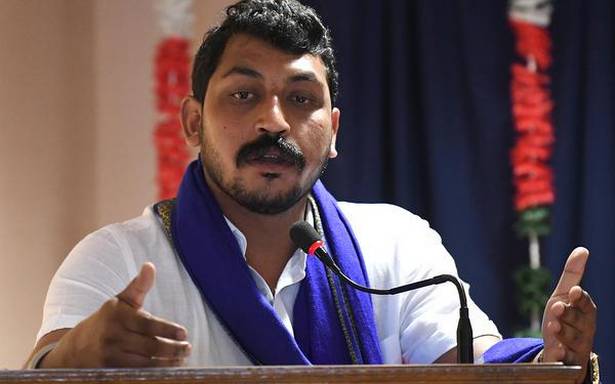 Considering EC’s stand, the judge disposed of the petition, observing that the petitioner’s application may be considered by the commission in terms of the Symbols Order and other applicable laws.

The Election Commission (EC) told the Delhi High Court on Friday that it will consider in accordance with law Chandrashekhar Azad’s (also known as Ravan) application for allotment of a common symbol for his political party for the upcoming Assembly elections in five States.

Counsel for the EC told Justice Prateek Jalan, who was hearing the Bhim Army Chief’s plea for allotment of a common election symbol for his ‘Azad Samaj Party (Kanshi Ram)’, that applications for allotment of symbols for four States – Uttarakhand, Goa, Punjab and Manipur – are now open for consideration and the process for Uttar Pradesh will start on November 14.

Considering EC’s stand, the judge disposed of the petition, observing that the petitioner’s application may be considered by the commission in terms of the Symbols Order and other applicable laws.

Lawyer Sidhant Kumar, appearing for the EC, said that there is a separate process of allotment for each Assembly election and therefore while the petitioner’s plea for common symbol for his unrecognised, registered party “could be considered” in accordance with law, there can’t be any “entitlement” to seek one.

“He has to meet the eligibility criteria for each State and allotment of symbols depends on the preference (of symbols) given by the applicant,” he said.

The application for allotment has to be made in the prescribed format and the earlier communication made by the petitioner for allotment of a common symbol was premature, he said.

The petitioner’s counsel M. S. Arya said that an application will be preferred in terms of the notice issued by the commission for allotment of symbols. Mr. Ravan said that since his political party was going to contest the upcoming Assembly elections and continuously organising rallies, the general public desired “to know the common election symbol”.

The petition claimed that Mr. Aazad was “suffering irreparable losses” due to the absence of any common election symbol.