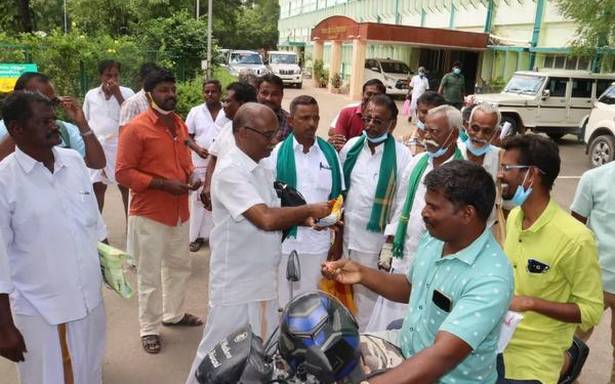 Farmers’ grievances redressal day meetings that are usually marked with tense moments began with celebration in Virudhunagar Collectorate with farmers distributing sweets to all farmers and officials.

The announcement by Prime Minister Narendra Modi on repealing all the three controversial farm laws hours before the commencement of the meeting was the reason for the celebrations.

“We used this opportunity to thank all those who supported us in our continuous protest against the farm laws,” said Tamil Nadu Vivasayigal Sangam leader, A. Vijayamurugan.

When senior farmer, O. Narayanasamy, raised the issue of delay in getting sowing certificate from the village administrative officers, Collector J. Meghanath Reddy promised to send a circular to ease the process at the special patta-related camps being conducted on Wednesdays and Fridays.

The Collector also promised to take efforts for expeditious disbursal of compensation under crop insurance scheme to the farmers who have been waiting for nearly one year.

The Collector also assured free flow of supply of fertilizer in the district as 1,900 tonnes of fresh stocks had arrived and was being distributed through the primary agricultural cooperative societies.

When Mr .Vijayamurugan raised the issue of wild boar menace in various taluks, the Collector said that efforts were being taken to check the crop damages caused by the wild animals.

The affected farmers have been asked to send their applications seeking compensation for crop damage to the Department of Forests with a certificate of joint field inspection by officials from the Departments of Revenue, Agriculture and Horticulture, the Collector said.

Farmers also raised the difficulties faced by cattle farmers in allowing ‘malai maadu’ (cattles) grazing along the western ghats after declaration of the forest areas in Virudhunagar district under Srivilliputtur Meghamalai Tiger Reserve.

A woman, who was seen weeping, sought the Collector’s intervention in getting back her 12 sovereign gold which was pledged in a cooperative society. Many others too joined her complaining of irregularities in some of the PACS.