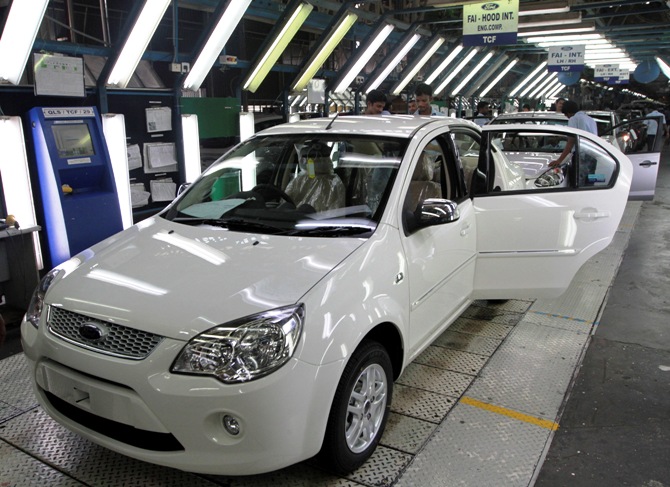 An unhappy, restive mood prevails at the Ford factory Maraimala Nagar, 50 km from Chennai, and the surrounding area. The security is tight — not just Ford security personnel but also Tamil Nadu state police who are posted at the main gate.

From September 9, when Ford India announced it was phasing out its units in India and leaving, workers at its manufacturing unit at Maraimala Nagar have held onto one hope: that the state government will step in to save their jobs.

That is what happened to Ford’s vehicle assembly plant at Sanand in Gujarat.

When the situation was not replayed in Maraimala Nagar, those hopes were dashed.

Around 1,200 workers started a sit-in on the factory premises.

Another 800 employees have been protesting on the shop floor.

No journalist is allowed in but from outside, one can see employees sitting around in groups, mostly men and some women.

Those workers who agreed to come outside onto the road were wary about speaking to the media, reluctant to go on the record either for fear of possible company backlash or fear that they won’t get a job if a new company takes over the plant.

“We were slow to start the protests, thinking that someone will take over the unit like Tata Motors did at Sanand.

“We needed jobs or else were battling for a good severance package. Both are being denied now,” said one worker who refused to be named.

After 25 years, Ford India decided to close operations because of years of accumulated losses, persistent industry overcapacity, and lack of expected growth in India’s car market.

The news came as a big blow to customers and Ford workers.

The closure of the Ford factory at Maraimala Nagar will affect a total of around 40,000 jobs in total because the factory jobs are linked to many ancillary units which employ unorganised workers.

The protests, which have received scant media attention, started after a Tata subsidiary, Tata Passenger Electric Mobility, signed a tripartite memorandum of understanding with Ford India and the Gujarat government to take over the unit given that Ford was leaving India.

But no one has stepped in to take over the Maraimala Nagar factory and hopes of any such development are fading.

“Talks are on with the Ford management. There is no solution package so far,” said Arun Sanjivi, secretary of the Chennai Ford workers union.

The rest of the factory is scheduled to close at the end of the second quarter.

The workers are demanding 135 days’ salary for every year of service.

Although the details are not clear, it is believed Ford was offering 85 days’ pay for every year, in addition to a fixed sum of around Rs 42,500 for every completed year.

The workers are also seeking ‘tax relief’ from the government on any severance package.

Some of the workers who walked out onto the street to talk to the Business Standard were afraid to make any statement about the severance package they want lest it jeopardise the talks.

At least four rounds of talks have taken place with the government and the union.

“The engine unit operation closed in March but the employees continue to be on rolls.

“There is no loss of employment till we conclude discussions with the union.

“That shows the company’s commitment to the process.

“The standoff is unfortunate when the discussions are going on,” said a Ford India source.

The company feels the demands of the employees are much higher than the industry standard.

But the workers see it differently.

“If someone can take over Sanand, why not our unit? The state government should do more to ensure that the land and the employees won’t get affected,” said another employee who grumbled about how the media was not giving them a voice by ignoring their protest.