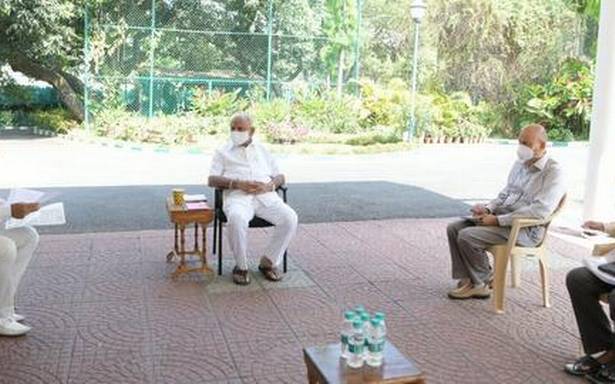 Chief Minister B S Yediyurappa on Friday chaired a meeting with top officials of the government to discuss the steps to be taken to contain the increasing number of COVID-19 cases in the State.

Mr Yediyurappa had earlier hinted at more stringent measures after April 18 to mitigate rising cases in the State. The government has been considering many options, including extending night curfews to more district centres.

Karnataka reported 14,738 single-day COVID -19 cases on Thursday, of which 10,497 were from Bengaluru Urban alone.

Health and Family Welfare Minister K Sudhakar, Chief Secretary P Ravi Kumar, other senior officials attended the meeting. The decisions of the meeting would be known later in the day.

The Chief Minister has also decided to hold an-all party meeting on the pandemic on April 18 (Sunday) in Bengaluru.