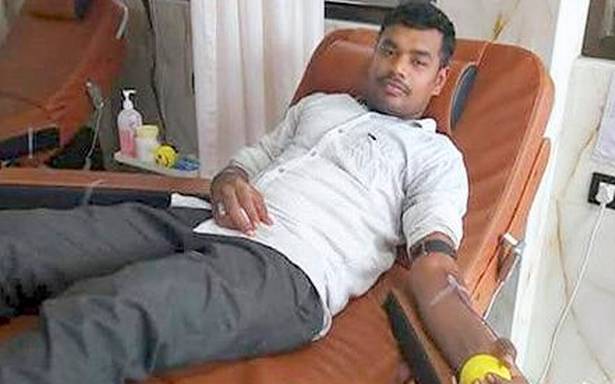 The 24-year-old youth G. Siva from Addanki mandal of Prakasam district has walked over 4,016 km across six States in the country to create awareness on blood donation, for the past five months and reached Visakhapatnam.

During the course of this journey, he met people, associations, college going students and explains them about the importance of donating blood. So far, the youth with the help of the Red Cross, has organised 33 blood donation camps and distributed over one lakh pamphlets.

Siva, a graduate, had started the campaign on April 9 in the year from Kanyakumari. He started the walkathon after one of his relatives died due to unavailability of blood in his village during the first wave of the COVID-19. Due to a lot of misapprehension, people are not coming forward to donate blood during the COVID-19. Compared to urban areas, many people are unaware about blood donation in the rural areas, he said.

So far, Siva has covered Tamil Nadu, Kerala, Karnataka, Telangana, Goa, Maharashtra, Gujarat and Pondicherry. Siva has also met actor Sonu Sood at his residence in Mumbai during his walkathon. All he carries is a bag that contains a tent, which becomes his home in the night.

He is financially helped by two professors from his college. “I walk around 45 km per day and completed 123 days of journey. People along my journey have helped me and motivated to carry the walkathon. I visit villages, interact with village heads or leaders and create awareness by organising meets. After reopening of educational institutions, I have started to visit colleges,” he said.

“My final aim is to meet Prime Minister Narendra Modi in New Delhi and give him a representation and explain the cause of my walkathon. Blood donation campaigns should be organised on a massive scale to meet the need,” he told The Hindu.