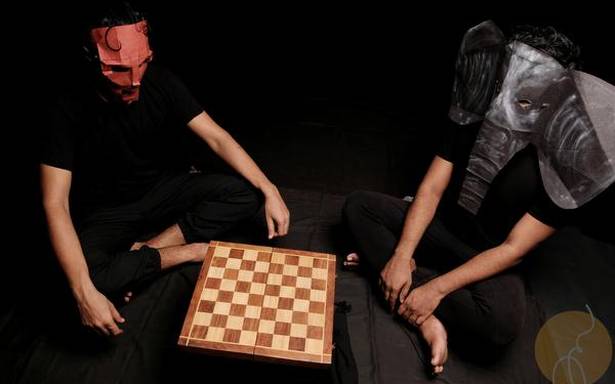 ‘Gajam’, produced by Kochi-based Rasa Theatre Collective, is one of the entries at the ThinkArts International Festival For Young Audiences 2021

With their maiden production, Rasa Theatre Collective’s Gajam, a play for children, theatre makers Rahul Thomas and Sidharth Varma, raise the pertinent issue of human-animal conflict. One of the plays being screened at the ThinkArts International Festival For Young Audiences 2021, Gajam examines the historical, yet troubled relationship between humans and elephants.

Recipients of the ThinkArts Grant, awarded to five people this year, Rahul and Sidharth made Gajam to tell the world a story from their land. The elephant is an enduring image representing Kerala and human-elephant encounters in the State have been on the rise. “We wanted a theme that was culturally-rooted, yet would resonate with a global audience,” says Rahul.

The first edition of the ThinkArts International Festival for Young Audiences was held in 2019. Owing to the pandemic, this year the festival is being held online. The festival would screen 10 plays — from India, Switzerland, Australia, Germany and Indonesia. A Kolkata-based organisation, ThinkArts “facilitates transformative art experiences for children and young adults”.

Since Rahul and Sidharth have had experience working with children, they had little trouble conceptualising the play. However, the challenge was to adapt to the online platform. “When you perform for children, in a physical space, they sit around and the energy is different. With the pandemic having shifted performances to a digital space, we had to open ourselves to being filmed. It was a learning experience,” says Sidharth.

They collaborated with professionals who understood the medium of film for shooting, editing, music and other technical nuances. Amrita Padmakumar was the director of photography, the music and sound design was by Varkey and the production was edited by Suufi.

The non-verbal play takes time to build up — it opens with the actors (Rahul and Sidharth) and gradually navigates ideas of closeness and conflict. The story is set in a space where humans and wild elephants come in close contact. Conflict begins when man and animal tussle for food and space. “We are aware that we are discussing a serious issue, but our idea is to encourage young adults to ask questions. Children are intelligent, sensitive beings and we thought it was important not to dumb down while addressing them,” adds Sidharth. Gajam is intended for children over six years of age.

The play takes place in three spaces — one is the puppet world, which depicts a world turning green, the second depicts the emergence of farmlands enacted by the actors and the third space has the two actors wearing human and elephant masks to discuss conflict. The play uses miniature puppets, too.

As the play progresses, the viewer sees how the relationship between animal and man changes from one of reverence to one of intolerance. It examines the various dimensions of conflict, throwing open questions of shared spaces and co-existence including why elephants leave the forest and enter farmlands. In a culture where we worship the elephant, should we look at the way we treat the animal? “The children watching the play may not be from human-animal conflicted zones. So our challenge was to make the subject resonate with them, make it connect to their reality. So, we used a food plate to raise the question of what happens when one’s food is taken away?,” says Rahul.

For Rahul and Sidharth, Gajam is also an artistic exploration of their Malayali identity. Though born in Kerala, the two lived their theatre lives outside the State. While Rahul worked in Bengaluru, Sidharth was based in Chennai. The pandemic brought the two to Kochi, where they met at a theatre workshop. They decided to collaborate and founded Rasa Theatre Collective, with an aim to create original, contemporary theatre performances that are rooted in the Indian socio-cultural and political milieu.

Based in Kochi, Rasa plans to create productions, collaborate with actors and organise actor training programmes, play reading and analysis and storytelling workshops (for children and adults). Rahul and Sidharth have started work on their next play, which will be aimed at adults.

Gajam will be streamed till November 22 at the ThinkArts International Festival for Young Audiences, after which Rahul and Sidharth intend to travel with it. “We want to create a hybrid version of it — both online and offline — and take it to community spaces and schools,” says Rahul.

Gajam can be watched at https://bit.ly/thinkartsfestival2021. Tickets are available on a ‘pay as you wish’ basis. The festival is on till November 24.