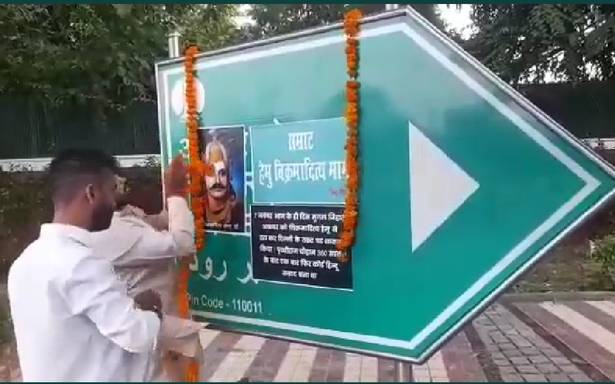 The police have registered an FIR in the matter.

A signboard of Akbar Road in Lutyens’ Delhi was defaced on Thursday and posters were pasted on it, declaring the road as "Samrat Hemu Vikramaditya Marg".

The Delhi Police have registered an FIR in connection with the incident for which fringe right-wing group Hindu Sena has claimed responsibility.

A senior official of the New Delhi Municipal Council (NDMC), under which the area falls, said police were informed about the incident and the poster was removed from the signboard.

"An FIR has been registered in the matter," a senior police officer said.

In a statement, Hindu Sena president Vishnu Gupta said, "Today, the Hindu Sena remembers… one of the bravest sons of Bharat Mata, Raja Hem Chandra Vikramaditya, also known as Raja Hemu,… (who) ruled Delhi for a short but significant period of time."

This is not the first time that the Hindu Sena has defaced signboards of roads in the national capital.

Last year, the workers of the group had defaced a signboard outside the Chinese embassy here after 20 Indian soldiers were killed in clashes with Chinese troops in Ladakh’s Galwan.

In 2019, they blackened the signboard of Babar Road in Bengali Market area, demanding that the name of the stretch be changed.

In May 2015, signboards of roads named after Muslim rulers Akbar and Feroz Shah were defaced by the group.