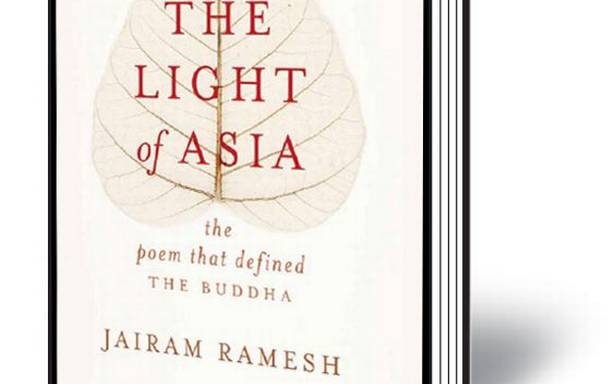 Published in London in July 1879, The Light of Asia by Sir Edwin Arnold, a poem on the life and teachings of the Buddha, contributed greatly to the international community’s knowledge of Buddhism and also played an important role in India’s cultural awakening and social transformation. Jairam Ramesh highlights the influence it had on the subcontinent’s leaders from Swami Vivekananda, Mahatma Gandhi, Jawaharlal Nehru to Dr. B.R. Ambedkar. An excerpt from ‘The Light of Asia: The Poem that Defined the Buddha’, the biography of an epic poem written in blank verse:

So far, Arnold had written a two-volume study of Lord Dalhousie as Viceroy. He had published translations of two very well-known Indian literary classics. In addition, he had brought out a number of original poems on Indian themes. But in 1879 he would hit the jackpot as it were and bring out the blockbuster that would reverberate across the world. The Buddha was very much in the air, what with Rhys Davids, Max Mueller himself and Madame Blavatsky having generated up great interest in him. It was natural for a man of Arnold’s background and inclinations to be drawn into writing something on this theme.

The title page reads thus: The Light of Asia or The Great Renunciation (Mahabhinishkramana) being the Life and Teaching of Gautama Prince of India and Founder of Buddhism (as told in verse by an Indian Buddhist).

So, from the beginning, it is clear that Arnold has adopted a novel technique: the life, character and philosophy of Prince Gautama of India, the founder of Buddhism, are being depicted ‘by the medium of an imaginary Buddhist votary’. He does this because, as he says: to appreciate the spirit of Asiatic thoughts, they should be regarded from the Oriental point of view; and neither the miracles which consecrate this record nor the philosophy which it embodies, could have been otherwise so naturally produced.

Clearly, the two-year stint at Poona College had left an indelible imprint on Arnold. In his preface he says that he wants to elucidate on Nirvana, Dharma, Karma and other chief features of Buddhism (like the doctrine of Transmigration), saying that it was his firm conviction that a ‘third of mankind would never have been brought to believe in blank abstractions, or in Nothingness as the issue and crown of Being’. He was taking the orthodox Christian critics head-on. The Light of Asia was in ‘eight books of blank verse, with some five or six hundred lines in each’.

The biggest political event of 1956 and indeed amongst the biggest ever in twentieth-century Indian history was the conversion of Dr Ambedkar to Buddhism, with lakhs of his followers, on 14 October of that year. Dr Ambedkar had had a long engagement with Buddha and Buddhism and the event came as no surprise.

I tried to find out whether The Light of Asia had ever figured in his life. That Dr Ambedkar was very familiar with Arnold’s work is evident from the fact that he had two copies of it in his personal library, now at Siddharth College in Mumbai.

But did The Light of Asia have any impact on Dr Ambedkar?

Here is what Akshay Singh Rathore, a noted scholar, had to say on this subject when I asked him whether the poem had meant anything to the key architect of the Indian Constitution: “As for direct influence it would be a stretch to say that it was in any way robust … But what is really the point of focus when thinking about Ambedkarite Buddhism are the points of rupture (with the Buddhisms of his day) and the points of continuity with the classical literature, and primarily the Pali canon. So coming then to indirect influence. Arnold awoke Kosambi and Kosambi had a huge impact on Ambedkar; however, what influenced Ambedkar was not Kosambi’s transmission of ideas from Kane/Arnold, but rather his break with them …”

What Rathore was referring to was the fact that by the 1940s Dharmanand Kosambi had put forward a very radical explanation for Siddhartha’s renunciation. Arnold’s poem and indeed all of Buddhist tradition believes that the Prince saw four sights in quick succession — an aged man, an ill man, a corpse and a tranquil monk.

The first three set him thinking on the nature of suffering and the fourth on the way to salvation. Kosambi had discovered Buddhism after reading The Light of Asia in 1899, and become a Buddhist monk and the first modern Indian scholar of Pali.

But in his posthumously published play in 1949 called Boddhisatva: Natak, Kosambi wrote that it was not so much revulsion for the world and hope for nirvana that set Prince Siddhartha on his search for enlightenment but actually it was his violent opposition to the use of force and conflict to resolve a water dispute between the two tribes—the Sakyas, to which his father belonged, and the Koliyas, to which his mother belonged.

It is clear that Kosambi’s late-life rejection of the conventional wisdom on the motives for Prince Siddhartha’s renunciation was fully shared by Dr Ambedkar. There is absolutely no doubt that Dr Ambedkar challenged the mainstream historiographies of Indic civilization through a revisionist account of the social and political role of Buddha and Buddhism in India’s past. The Light of Asia was embedded in that historiography. This set him apart from others in India who were also great admirers of Buddha, like Tagore, Gandhi and Nehru.