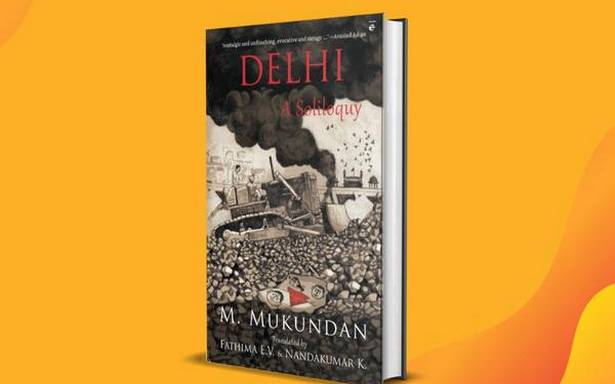 This is the third win for a Malayalam translation since the ₹25-lakh award’s first edition in 2018, the earlier being “Jasmine Days” (2018) by Benyamin and S. Hareesh’s “Moustache” (2020)

M. Mukundan’s "Delhi: A Soliloquy", translated from Malayalam by Fathima E.V. and Nandakumar K., was announced winner of the JCB Prize for Literature on November 13.

Besides the cash amount, M. Mukundan won a trophy created by Delhi artist duo Thukral & Tagra, titled ‘Mirror Melting’ "This is an award of great magnitude. It gives the certain book and its author an immense visibility, deleting all the borders of culture and languages. This award will help me to reach out to readers, non-Malyali readers in particular, across the English speaking countries even beyond that if the book is translated into other languages," said the winning author in the hybrid awards ceremony.

Hailed as a contemporary classic in Malayalam, "Delhi: A Soliloquy" published by Westland, is about ordinary people whose lives and stories have leached into the very soil and memories of Delhi.

It is an account of life in Delhi in unusually difficult times: the India-China and Indo-Pak wars, the Emergency, the anti-Sikh riots.

Ms. Rai said M. Mukundan’s book "speaks with grace and poise of the large lives of small people in a city with a broken soul. Clairvoyant in its human empathy, this extraordinary book is the distillation of a lifetime of experience".

M. Mukundan, whose stories and novels have been widely translated into various Indian languages, English and French, is a recipient of multiple awards including Ezhuthachan Puraskaram, the highest literary honour given by the government of Kerala, the Crossword Book Award twice — first in 1999 for "On the Banks of the Mayyazhi" and again in 2006 for "Kesavan’s Lamentations".

Four of his books have been adapted into award-winning films.