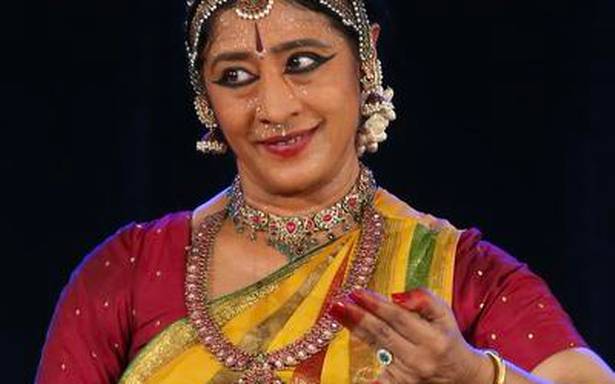 The easing of restrictions has brought the performing arts back on stage. Rasika Ranjani Sabha heralded the season with a series of dance performances in their Navaratri Mahotsav. Senior dancer Meenakshi Chittaranjan was part of the line-up. .

Meenakshi, carrying on the tradition of the Pandanallur bani, began her performance with a small verse written by Adi Shankara in praise of the goddess, before moving on to a composition of the Thanjavur Quartet, ‘Sri Rajarajeshwari’ in raga Rama Manohari, Adi tala. Addressed to Brahadambha, the consort of Lord Brahadeeshwara, Meenakshi described the attributes of the goddess through simple graceful postures and gestures.

Timeless appeal of a kriti

Watching the Khamas raga varnam, ‘Swamiyai azhaithu odi vadi’, after a long gap was an experience of great joy. The grandeur of the composition, the interplay of swaras and sahitya in a poetic manner remains unparalleled. It proves the timeless appeal of the Thanjavur Quartet composition in which the nayika tells her sakhi to fetch Shiva, the one who wears snakes as ornaments, has tiger skin for clothes, and whose body is smeared with ash.

Meenakshi explored the two facets of Shiva’s third eye — destroying Manmadha and creating the six-headed Muruga through her sancharis.

The choice of a leisurely pace allowed the dancer to perform the jathi sequences in the varnam with perfection and precision in varying speeds, making it a pleasure to watch.

The popular ragamalika Devarnama ‘Baro Krishnayya’ by Kanakadasa highlighted the bhakti element through a beautiful visualisation of the story of Kanakadasa. A staunch Krishna devotee, he is denied entry into the Udupi temple since he is a shepherd. But moved by his devotion, it’s the god himself who turns around so that Kanakadasa can have darshan.

Meenakshi’s portrayal of Kanakadasa’s anguish over not being able to enter the temple and his excitement over seeing Krishna brought to the fore her years of experience and maturity as an artiste.